I was home alone on Christmas Eve, feeling slightly under the weather.  Naturally this meant I felt compelled to exercise. I went to YouTube because there was a hip hop workout I did the other day and I wanted to see if that broad had any others. When I typed in her name, even though she’s Spanish, one of the first things that came up was SUPER FUN K-POP DANCE WORKOUT.

Oh shit, hold the phone, I screamed out loud to Trudy and my succulents. This was bound to be good. Plus, I went through a heavy k-pop/j-pop phase back in 1999-2002 when I used to get numerous foreign TV channels, like ZeeTV, included in my cable package (then they switched those to premium, good one, Comcast). My favorite programming was obviously the music videos, followed closely by the soap operas. But the music videos were like soap operas in and of themselves — especially the slow jams, so depressing and full of tragedy. I kept a blank tape in the VCR so I could record my favorite videos. Sometimes I would even opt to stay home when my friends were going out to the bar, because I was in so deep.

My all-time favorite was Lee Juno’s “Return of the King of Dance.” Years later, I found the CD on some Asian music webstore, and I was sorely disappointed when it arrived and I realized that that was the only good song on the whole disc.

OK, so back to Christmas Eve. When I saw this workout video on YouTube, I forgot all about the coughing fits I had been having all evening and immediately pressed play to be sucked into a world of shiny Korean choreography.

IT IS A GODDAMN DREAM.

And somehow, I’m actually able to do it! I am never able to do any dance-based exercise workouts. Don’t even come near me with Zumba. I will fall and break my face. But k-pop fitness? It’s like it was MADE FOR ME.

My gateway into this niche of the fitness industry was through YouTube user SarahKayPop. She puts together 35 minute compilations of various k-pop dances that are on YouTube, and she even throws in some of her own in there too, which she performs in her bedroom. Not intimate at all. But through Sarah, I found the official KpopX Fitness channel and it hasn’t just consumed me—it has carefully digested me and shit me out as a better, more Korean version of myself.  It is honestly the first thing I think of when I wake up in the morning, all I talk about at work, and how I end my days — pushing the coffee table out of the way and k-popping my fat face off.

And I know this will come as a huge shock, but I’m following KpopX on Instagram now and have basically imprinted with their creator, #MaddyLim. 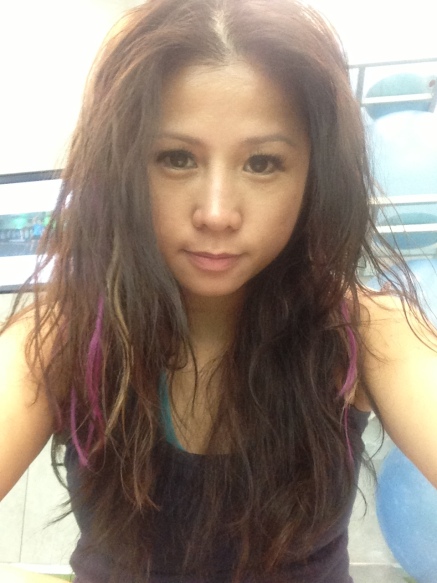 “Who’s that?” Henry mumbled last night during my post-dance routine of continuing to scour YouTube for the next day’s lineup while Henry watches with glazed eyes from the couch.

“THAT’S #MADDYLIM, THE CREATOR OF KPOPX!” I screamed. How did he not know this by now? But then he was laughing, which means that he was just trying to piss me off, which is really stupid considering my muscles are now inflated with gangnam style and cat ears.

I don’t have a huge floppy bow yet but Henry will make me one. He hasn’t said that he will yet, but come on.

One of my favorite moves requires one to put the hands together in the shape of a heart above the head and then lean forward while furiously shuffling the feet. It probably burns at least three Jollypong bag’s worth of calories. I tried to teach this move to Glenn on Monday morning but he wouldn’t get up from his desk, saying that it was “stupid” and telling me to “stop.”

The other day at work, I went to the official KpopX website and learned that I can become a certified instructor online for only $189.99! Then I tried to order one of their official shirts, but shipping to the US is not available! WHAT WHY!? So now, just like when I didn’t get a Chiodos hoodie for Xmas 2007, I’ll have to make my own I guess.

And even though I’m not certified yet, I took liberties and taught Henry how to do this exhilarating and mildly perverse routine to Psy’s pony-play inspired hit “Daddy.” He was not filled with such wow like I was, though. I guess KpopX isn’t for everyone, surprisingly.

But so far, my favorite routine is to the crowd-pleasing banger “Hot Issue” by 4 Minute. I might know the moves by heart now, is all I’m saying. That song came on the other night when I was forcing Henry to fall asleep to a k-pop Spotify playlist and I nearly flipped him out of the bed, that’s how hyper I became. IT’S THE MOTHERFUCKING JAM.

“You have a really addictive personality,” Amber2 laughed after I gushed about KpopX on a boring Tuesday afternoon at work.

“Yeah,” Todd agreed. “You go from one thing to the next so fast! For example, you never talk about your plants anymore.”

YES I DO AND THEY’RE SUCCULENTS OK.

Henry came home from the store last night when I was in the middle of a “Big Bang” routine and I went ape shit on him for corrupting my zone.

“I’m sorry!” he yelled. “I didn’t think you would STILL be kpopping!” Bitch please, I was going on 75 minutes straight by then. Maybe call ahead next time.

I also really like the k-pop routines by Crazy Sock TV, in case you care.

Sorry Paul Eugene, but I’m putting a moratorium on the gospel aerobics. Jesus ain’t got shit on these k-pop bitches.