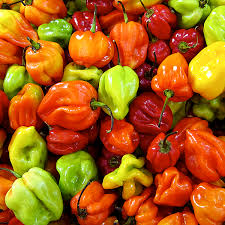 Boy, guys, was this Friday OFF THE CHAIN!

I mean, OFF THE HOOK!

I mean…it was really OFF ITS ROCKER.

First, the work day was shaping up to be preettttty fucking dull. But suddenly! Sue sent an email to the whole office:

Something about PEPPERS, REALLY HOT PEPPERS being up for grabs on the table by the kitchen.

At that moment, I caught a glimpse of Glenn in my periphery, rising from his desk and disappearing in the direction of the kitchen.

I turned around and asked Todd, “OMG do you think Glenn is going to get pepper?! He got up awfully fast!”

“I thought so too at first,” Todd said, “but then I realized that the timing wasn’t right. He was already standing up whenever the email came in.” And then, “He doesn’t even get up that fast for cake.”

“Dammit, that’s true” I said, really hoping that Glenn was really in a huge rush to have first dibs on the HOT, REALLY HOT PEPPERS, imagining him body checking Terry out of the way, reigniting their feud from last summer.

“Did Glenn go to get some of those peppers?” Lauren asked from her desk in front of me.

“Apparently not, but we’re trying to cause speculation,” I admitted.

And then word finally traveled down to Amber2, who rose from her seat and called out to us, “Did Glenn get up for the peppers?”

This was A HUGE DEAL. WILL GLENN PEPPER OR NOT PEPPER?! Only time will tell.

“You guys, what an exciting Friday!” I laughed, and then we all giddily waited to see if Glenn would, in fact, come back with peppers.

AND OH LORD ALMIGHTY, HE DID!

He had one small red pepper in hand and we all fucking DIED.

He looked confused at first but then quickly wrote it off because he’s used to this hootenanny by now.

Then he put the pepper on my desk and everyone was starting to gather around and I was like, “Guys, I’m not eating this.”

And then that was that.

After work, Henry, Chooch, Judy and I met my mom and Corey at Bob Evans for dinner where we had a waitress who said “thank you” constantly and Chooch basked in the fact that his novelty has not yet worn off for my mom and she giggles at every idiotic thing he does.

HIS SCHTICK WILL GET OLD EVENTUALLY. TRUST.

Anyway, I put on the new Carly Rae Jepsen “B-Side” release and Judy screamed from the front seat, “WHO IS THIS, ERIN. OH. WELL, SHE CAN SING.”

Meanwhile, at Bob Evan’s, they were out of chicken pot pie and Corey was SO SAD and Chooch acted like he never buttered a biscuit before and before he even ate the bitchin’ thing, the table looked like a biscuit battlefield and Henry frowned, wondering where he went wrong, living in a house with not one but TWO people who don’t understand how to properly use a butterknife.

Halfway through dinner, we all became aware of a fly that was buzzing around our table. When the waitress brought us the check, Judy gruffly asked, “You gonna give us a discount for that fly?!” The waitress just nervously laughed and apologized, but Judy wasn’t done talking about this.

“This place ain’t open 24 hours, so they should, you know, what d’ya call it….fumigate? They should do that when they close.”

“Yeah, maybe hang some fly strips,” Corey said and we all started cracking up but Judy seemed on board with that idea.

I’m pretty sure Henry has taken me to “restaurants” with fly strips hanging around, all appetizing and sanitary.

During one of our waitress’s last visits to our table, Judy suggested, “And you should tell them to do something about this broccoli. Terrible.”

If I hadn’t been so giddy to begin with, I might have tried to climb inside Henry’s frown and hide.

After dinner, we went to Target, where Judy screamed across an aisle, “WILL YOU BUY ME BENGAY??” and then held up a sheer blouse I was buying and asked, “Will you wear something under this or no?”

Well, I’m not wearing it to the Moulin Rouge, so….

And then Mat Kerekes solo album was released today, and it’s a real gift of sound:

Anyway, today was pretty good when you add up all the moments.