I woke up Saturday morning at some unholy hour and had an idea for a new greeting card, and then any chance I had of falling back asleep was slaughtered.

Here’s some Kpop lore for you, which you will need to know to fully understand this card: Korea has an abundance of music countdown shows, similar to TRL, where Kpop groups come on and perform their latest single. One of the shows is called Inkigayo (“popular song”) and they are notorious for selling a sandwich that the idols go wild over.

Legend has it that G-Dragon has been known to use those sandwiches as a carrier pigeon to get his number to whichever female idol he had his eyes on at the time. Look, I don’t know if this is true or not, but Seungri (from G-Dragon’s group BIGBANG) said it once on a variety show!

And now that there’s a new dating “scandal” in the kpop world with Jennie (Blackpink) and Kai (EXO), this whole Inkigayo sandwich rumor has returned and the memes are so entertaining!

So I thought to myself, while half-asleep, wouldn’t it be funny to make a card shaped like the Inkigayo sandwich where the sender could hide a message inside…

I started picturing a children’s pop-up book, where there are also tabs to pull, and I thought, “Maybe it could be a piece of lettuce that could slide out of the sandwich…”

But that’s because silly me forgot for a second that this is a Korean sandwich, which are way different than American sandwiches that are stacked with lunchmeat and cheese. I googled Inkigayo sandwich just so I could have an accurate depiction for my design, and quickly realized that there are no trimmings of lettuce or tomato sticking out that I could use.

Do you guys know what’s in an Inkigayo sandwich?

One layer has cabbage, cucumber, apples and corn. It looks like a coleslaw. I’m down for that.

Another layer has boiled potatoes, eggs and crab. So, like an egg and potato salad combined with some crab thrown in. I don’t eat seafood, but maybe it’s fake? If so, still down for that.

The middle layer, though.

I LOVE putting jam or jelly on grilled cheese so, maybe this is similar?

Apparently, these sandwiches have become so popular that the 7-Elevens in Korea sell them now so that might be my first stop when I go back, you can judge me, I’m cool with it.

So, since I had no protruding produce to work with like on a beefy American ‘wich, I made an “Inkigayo Sandwich” label which the actual sandwiches do have, according to the pictures I’ve seen, and that’s what you pull out to reveal the message!

I used Jennie and Kai for my example message. Have you SEEN Kai rock a croptop though? Jennie is so lucky. 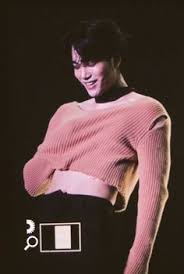 The back of the card is gold glittered cardstock, making it nice and sturdy.

I’m obsessed with this card! You could use it for so many things! Here’s the link to it – go snatch one up!

Let’s cap this off with a video of BIGBANG performing Bae Bae on Inkigayo!