Do you know how often I hear, “Oh my god, Chooch looks JUST LIKE HENRY?” Too often. Too fucking often. In my Chooch Nostalgia research, I found this old comparison exhibit I made, because apparently when he was a year old, everyone thought he looked JUST LIKE HENRY, too. Maybe he looks like Henry when he’s blankly staring at shitty television programming or cupping his jock like all little boys (and men) do, but everything else is all Erin, OK? EVERY THING ELSE, right down to the attitude.

I like that at my new job, they have no one to compare Chooch to but ME because fuck if I have any photos of Henry on my desk. Henry has a photo of his nieces and nephews at his desk. His nieces and nephews. But not one picture of me. So I let people continuously ask, “Which one is your boyfriend?” when they see the picture of Chooch with Chiodos. 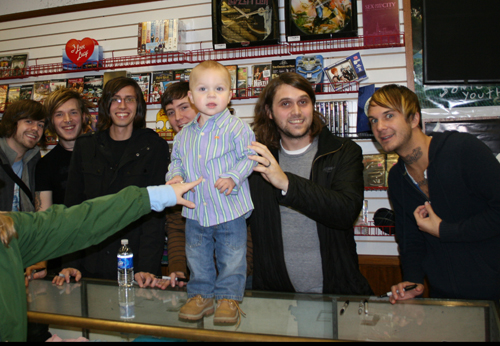 “All the way to the right, guys,” I answer every time.