OH SHIT, I found (and I do mean pointedly, not accidentally, in that I took time out of my busy and important day to seek out these particular photos) all these old pictures from some rickety mall parking lot carnival Henry and I took his kids to back in 2003. In 2003! I was only 23! Oh, youth. Somehow though, I feel I’m more immature now than I was then. A real grown child.

This is what I wrote in my LiveJournal (don’t you wish I was still as verbose as I was in 2003? I mean, holy shit, an entire paragraph! And now I’m all succinct and shit.):

Yesterday, Henry and I took his kids to the little carnival in the mall parking lot. Actually, it was a pretty big carnival. It had all the best rides in the death trap vein. I was excited to have a riding partner for once (since Henry and my friends are motion-sickness losers). Blake and I got ride all day passes and set off on our mission to ride every ride at least ten times. Not quite. I was fine until probably the sixth ride that we went on. What did it was that we were literally the only two people there that were riding anything, so we walked off one ride and right onto the next. We didn’t give our tummies a chance to rest. At all. So here I am, having hot flashes and feeling like the collar of my shirt is too tight around my neck. But I perservered. I didn’t want Blake to think I was lame. Apparently, Blake was playing the same game. He was sick as well, but kept on keepin’ on. After we went on the Ring of Fire, we looked at each other knowingly and sat at a table. Once we were composed, or so we thought, we asked Henry if we could leave. I had to do breathing exercises the entire way home in the car, to ensure that I wouldn’t vomit all over myself. Unfortunately, Blake must not have learned this strategy, because he threw up out the window, and it hit the car behind us. Robbie and Henry were laughing, which I didn’t think was very cool. Although, if my breakfast wasn’t touching my tonsils (which I don’t have anymore, but that sounded so cool), I probably would have been laughing, too.

Yeah, we rode all day, alright. For a whole whopping forty five minutes.

OH NO, it’s THE CLAW! This might be my favorite carnival ride of ALL TIME. It tries to distract you with all the airbrushed Jem and the Holograms rejects, but then it starts and it’s all SHIT JUST GOT REAL, MOTHERFUCKERS. I made Henry ride this with me the last time we went to the Big Butler County Fair, which I think was in 2002. He’s proudly worn his Carnival Ride Abstinence ring ever since. 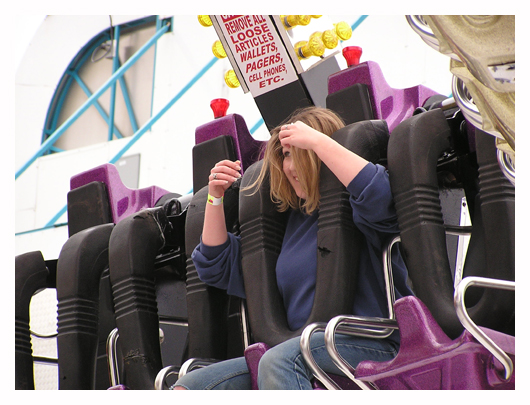 Livin’ it up on The Claw. After our first go-around, I was convinced I wanted to have Michael Jackson’s baby so I could move into Neverland and have him plant one of these bastards right behind the roller rink he’d have previously built in preparation of my arrival to the ranch.

This was Blake and me after riding The Claw for the fifth time. I was over it. Completely over it.

(I kind of wish I could dive into this photo and punch myself in the vag for ever thinking I was fat back then.)

Look! It’s Robbie’s head. This was one of the few times he wasn’t braving the fun house, which he continuously did the entire time,  since it was the only thing he could handle. I think he even started timing himself, pretending he was training for a real life World of Warcraft bootcamp.

This ride really starts to feel like quadruplet-induced morning sickness after the third go-around. You can see how happy I am.

YEAH THE MOTHERFUCKING RING OF FIRE! I don’t think this is what Johnny Cash had in mind, unless the song is about virtual evisceration by the hand of centrifugal force (if that’s wrong, then just insert proper physics term here) while cycling upside down inside a caged roller coaster. I didn’t even wait for Blake as he was stumbling around, gathering his bowels off the ground like a fucking garden hose.

OH YEAH, IT’S ALL FUN AND GAMES ON THE ZIPPER, BITCHES. I’m pretty sure I was thinking to myself, “I’m so glad I haven’t yet given Blake a reason to go home and tell his mother I vomited on his face.” Also – look at my fucking Leno chin. Jesus Christ.

You can tell Blake was trying so hard to not puke. This was one of our mutually agreed upon “time outs.” But I don’t think we ever declared it “time in” after that.

8 Responses to “A Mall Parking Lot Carnival from 2003: An Originally Titled Post By Erin”