Hi! Apparently this is a Blog Bash! I’m not very social in the blogosphere so I’ve never done anything like this before, but I’ve been trying to be more active in the blog scene, if you will, so I am now going to attempt to play with others.

I’ve been instructed to talk about myself, so here are the pertinents you might want to know if you are new here:

I am not going to include my name in the bullet points because I trust you have enough mental braun to figure it out all on your own.
And now I will answer these standardized questions, because if I don’t, I will be the first person ever to get jail time for defying the rules of a Blog Bash. (Plus, I’m a people pleaser. No, really.)
1.) Why do you blog?
It’s  my job to keep the pervs of the Internet abreast of my actions and whereabouts. Also, the tapping of the keyboard massages my frontal lobe.
Also #2, because I can’t get anyone to listen to me in real life.

2.) What do you blog about?
Good question! Pointless drivel, mostly. My blog is not the place you come to for answers, unless you’re looking for the best way to die at a county fair or what new falsetto-voiced scene boy to crush on. (Kellin Quinn all the way.)
I literally just blog about what I’m doing, while finding the most extreme sex analogies and metaphors to make the most menial activity feel like an afternoon of drowning in a pool of semen and butt plugs. It is my specialty, something that makes my grandma proud.
3.) What do you find to be the biggest reward you get from blogging?
It helps release pressure from my brain. Also, it’s nice to have things chronicled so I can, say, search through the backlog of March 2008 and prove to Henry that he did indeed go down on a tranny in NYC after buying red velvet cupcakes from Magnolia.
4.) How long have you been blogging?
Since it first began. I gave birth to blogging. Its father is an Apple II GS.
For honest:  2001-2007 as “vagynafondue” on LiveJournal, and then on this here site since then. I’ve been journaling in general since 4th grade though. It’s an addiction. Worse than crack, except I get to keep my teeth.

5.) Let’s hear the story behind your blog title!

My grandma and I have a very illustrious history, full of afternoons reading Dickens together beneath a parasol and light-hearted flour fights during impromptu snickerdoodle bake-offs.

That’s a lie. I don’t know why I typed that just now.

The truth is that I was always the black sheep, that a lot of my actions or ideas shamed my grandma. Even as a small child, when I would fuck up, she would sigh exasperatedly (sometimes even disgustedly while running a red pen across my name on her Will) and say, “Oh honestly, Erin.”

And not a day goes by where I don’t have some extent of an “Oh honestly” moment.

I leave you with obligatory photos of my obnoxious mug: 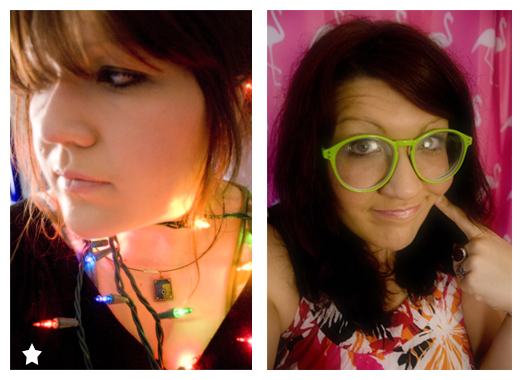 39 Responses to “Yo, it’s a BLOG BASH, double rainbow all the way!”