[Promise this is the last of this series!]

There were two reasons I had to go back to the Butler County Fair last week:

I needed to go back with:

Alisha was game to go back too. We decided we (Alisha, Henry and myself) would just stick with the $5 general admission and just get the ride all day pass for Chooch. I thought I would be OK with this, having had just re-learned how to walk without bowing my legs after all the riding I did the previous week. But as soon as we walked through those gates, that goddamn itch was there. I saw the Wacky Worm and the Freak Out and began wistfully chewing on my lip. Then I saw KIRK! and yelled to Henry, “OH MY GOD IT’S KIRK, LOOK! NO DON’T LOOK! LOOK IT’S KIRK!” He was walking right toward us and I was practically weaving a disguise out of Alisha’s hair so he wouldn’t see me.

Then we saw Andrew and his Dutch pancakes and I shouted, “Oh my god, there’s Andrew! Henry, do I have your permission to have sex with him? OH MY GOD, DON’T LOOK OVER THERE!” It was so surreal, like we were walking through an alternate plane, seeing all these people Alisha and I had met a week before, but now they were like celebrities that we couldn’t approach. (Mostly because I was being too idiotic at that point.)

In my other Big Butler accounts, I never mentioned this one super slick guy Alisha and I previously met. She and I were innocently sharing an order of cheesy tornado chips at a table tucked away behind two food vendors when this really smooth guy sauntered over and asked, “Do you think I should put this shirt on, or would it be too much blue?” Currently, he was wearing a gray wife beater with blue plaid shorts. Alisha and I both agreed that he should just leave well enough alone.

“That’s what I was thinking, too,” he said, stuffing his t-shirt under his arm. “I’m Jordan. What are you guys drinking?”

“Well, I have water, and she has tea,” I answered slowly, wondering where this was going and instinctively palming the top of my water bottle to block any imminent date rape. The next thing I knew, he had grabbed his friend John from one of the food booths and, after introducing us to him, smugly added, “They’re partying with us tonight.” Oh OK, how lovely. Alisha and I exchanged surprised glances. Actually, hers was more of a “Do they not know I don’t like dudes?” smirk. There was some more braggadocio-laden banter, when Jordan realized he had a customer at his sunglasses tent. “Customer, be right back. Don’t leave!” he yelled over his shoulder.

And then we saw him again a week later, as Henry was ordering food FROM JOHN and I did everything but stuff lit cigars in my eye sockets to keep from making eye contact.

JOHN. He “owns all the booths on the block,” according to Jordan.

JORDAN. He was actually sort of cute, but his personality was trying way too hard to be Jersey Shore. Alisha said if she liked weeners, he would be her type. Then she fist-pumped.

I made sure to tug on Henry’s arm and point Jordan out to him. “I could’ve had sex with him last week,” I added, in a bored tone, blowing on my finger tips. “But he was trying too hard.” Henry really enjoyed this virtual walk of carnival boyfriends. I think he would have probably handed me over to Kirk though. Actually, I kind of wish I had instigated a fight between those two.

Unlike Kennywood, Chooch was actually very eager to ride things. I couldn’t get him to ride the fucking Wacky Worm though! He preferred instead to ride things where he could make girls do all the work. I really don’t know where he learned that considering I don’t do shit for Henry.

Chooch’s favorite ride seemed to be that stupid Fun Slide; you know, the one that requires asses to be swathed in potato sacks? There was another little boy who was just as charmed by it, and they began racing each other. They’d get to the bottom, throw their sacks at the Mexican carny, then run right back to the entrance. Finally, the carny was like JUST KEEP THE SACKS, JESUS. Alisha and I were sitting in the grass, watching this spectacle, while Henry stood off to the side looking like a creeper. The little boy’s mom deduced that I was Chooch’s mom and inched her way closer. At first it was a brief laugh and smile, a shared acknowledgment that yes, our sons looked cute racing each other down the slides.

And then, before I knew it, she was popping a squat right next to Alisha, and delving into a tale about how her sister Amy was on her way from PITTSBURGH to bring her cigarettes and she sure hoped Amy would arrive soon because her phone was dying and she sure did need a cigarette.

“I’d take anything at this point!” she said, passively hinting to Alisha.

So Alisha sighed and fished in her purse for a cigarette. Sometimes Alisha is nice like that.

Meanwhile, I’m trying to prop my camera up on my thigh to shoot clandestine snaps of her.

I got a text from Henry that said, “You are the WORST at stealth photography.”

A helicopter flew past and Anonymous Mom asked if any of us had gone up in it yet. Rides were $15 per person. We said no and she told us that she and her son had done it and it was totally worth it. Alisha and I pretended to be impressed.

My brother Corey and his girlfriend Danielle were there that night and came over to join our awkward pow wow. Corey sat right next to Anonymous Mom and began pulling out all the Silly Bandz he and Danielle had purchased. “This entire pack is fast food scented,” he said, draping each bracelet carefully across the bag on his lap so we could all not ‘ooh’ and ‘ahh.’ Danielle was excited to show off her collection, too.

Then Corey brought up the helicopter, since we were sitting relatively close to it’s little launch area.

“Oh, she went on it with her son!” Alisha announced with faux enthusiasm, pointing to Anonymous Mom, which prompted her to give Corey the same spiel we already snored through. While she was talking about it, I texted Corey: She just sat down with us…?

Once he learned that we had no idea who she was, he put on this exaggerated guise of interest, totally making her think like we gave a shit about her helicopter ride and sister Amy from Pittsburgh.

We must have sat there with her for thirty minutes without ever making introductions. It was so uncomfortable (clearly not for her, though). When we finally pulled Chooch away from the slides and began to walk away, Alisha hesitated and then said, “Nice meeting you!”

Later on, we saw her again. Amy was with her! We rejoiced.

Naturally, this girl’s mom had to come running over to make mom-talk with me, too. Thank god she didn’t linger though. 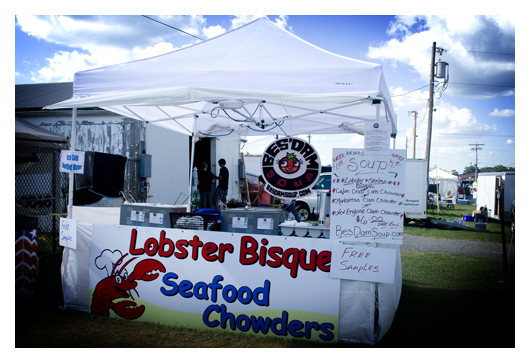 “It’s that damn soup place, don’t make eye contact!” I yelled, but then I was like, “Piss on that, I want some samples.” So once again, Alisha and I promised to be back for a full bowl but we stood them up because it’s SUMMER TIME. That soup was seriously good though. I went to their website and they have apple pumpkin soup, so now I want to buy a batch and have a soup party at Alisha’s house.

Eating tornado chips like a champ. (Don’t ever call them tornado fries. Alisha made that mistake and almost got punted out of the fairgrounds by a grisly old lady in a red cowboy hat. It only got worse when she ordered “pop” and not “soda.”)

Chooch just walked right up to the food places and said things like, “I WANT LEMONADE.” Then Henry would be all, “SHIT now I have to pay for this, thanks.”

In the end, I caved and decided it was imperative to at least ride the Freak Out and the Zipper. So Alisha, Corey, Danielle and I bought tickets. I loved Freak Out even more this time, though I was pretty aware of the group of guys across from me who mimicked me during the entire ride, and decided that I really need to have this in my backyard, just as soon as the house behind me accidentally gets hit with a “meteor.” A quick jaunt on the Freak Out will soon become my new morning coffee. You just wait.

Danielle was so happy to have survived her first time on the Freak Out, that she began doling out hugs to everyone.

Before we left, Chooch begged me to ride the Sizzler with him, so I had to pay another goddamn $3 for a ticket, but it was worth it because he was laughing his little underoo’d ass off the whole time. And I didn’t drop him after the ride ended. Not that that’s ever happened before.

I don’t see how any other county fair this summer is going to outshine the majesty that is the Big Butler Fair. 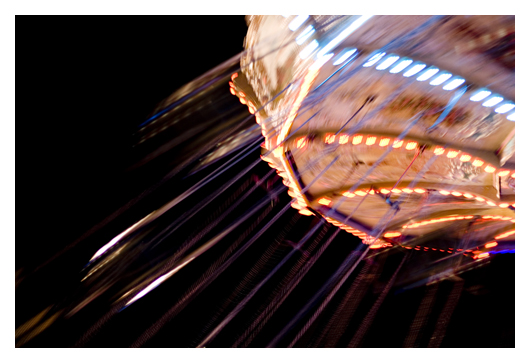