He let us attempt to zombify him before we left the house on Saturday, which was no small wonder. Unfortunately, Henry and I are no masters at costume makeup and by the time we arrived at the mall, most of it had seemed to come off. We should have just used dirt – that seems to stick to his face like tongues to my frozen heart.

But before we left the house, he decided he was going to hang outside and wait for victims to walk by. As soon as he would see someone in the distance, he would run across the all the front yards until he was parallel to where they were on the sidewalk, stick out his arms, and commence zombie-stalking. Some people played along and pretended to be scared, but then there were some assholes who were too cool to be concerned with anything other than their awesome iPods, which were probably playing really lame shit. Fuckers.

The turn-out was pretty good when we arrived. There were zombie patrons milling around the mall near the Monroeville Zombies homebase, and several people stopped to comment on Chooch’s Jason shirt and his hat. He gets aggravated when this happens, so of course I laughed. He even had a slight brush with paparazzi as a few people (including a professional photographer) stopped to take his picture. Oh, to walk a day in Chooch’s shoes.

We were only at the carnival for about an hour. Chooch started out fine, things like this don’t scare him. But he doesn’t like loud noise, and God forbid there was some atmospheric music playing to enhance the mood of a post-apocalyptic carnival. It’s not like it was fucking Dimmu Borgir or something, but Chooch was still clamping his hands over his ears and being Mr. Miserable about it. He half-assedly played three of the games (they had a whole little midway set up with zombified fair games) before whining about wanting to leave. So Henry had to use up the rest of the game tickets while I kept Chooch in the (quieter) back room where the tickets could be traded in for prizes.

I’m starting to think Chooch will never go to Warped Tour with me.

Anyway, the carnival was hosted by Dawn of the Dead’s Ken Foree and I’d have liked to have been able to take a picture with him and Chooch, or maybe stick around for some of the other entertainment that was on slate, like the costume contests and RNR Freak Show, but Chooch was becoming increasingly overwhelmed as more people were stuffed inside the small space. This is often the downside of bringing a four-year-old companion to events. 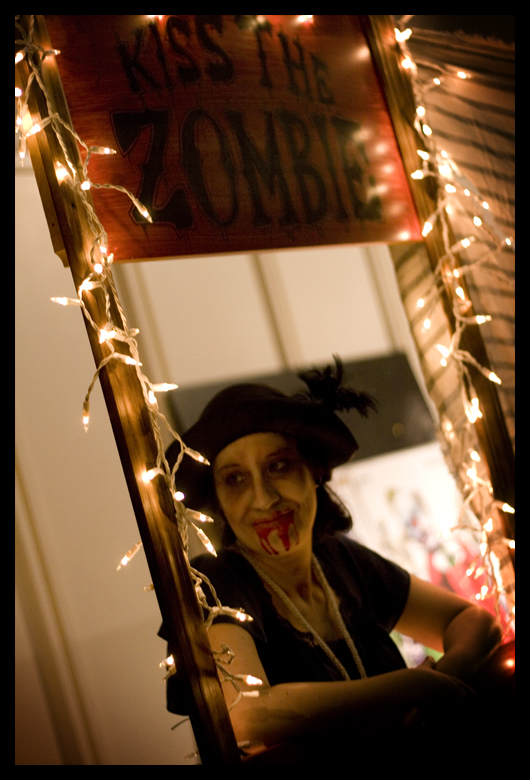 By the end of it, so much of Chooch’s makeup had worn off that he just looked less like a zombie and more like the victim of a grandma’s overzealous affection. Not very ghoulish.

I’ll be so pissed if “Subtle Zombie” is big next year.

I hope Kevin Kreiss continues to offer such fun and zombiriffic options throughout the year. Maybe Chooch will be less surly next time.