Last night, I couldn’t stop laughing because Henry, with his glasses off and beanie pulled tight over his forehead, looked like if Bo Brady from Days of Our Lives was about to take the Fancy Face out for a fishing trip.  Of course, all Henry did was frown when I started shouting about how uncanny the resemblance was and how I’d like to be his Hope so we could go knock one back at good old Shenanigans. 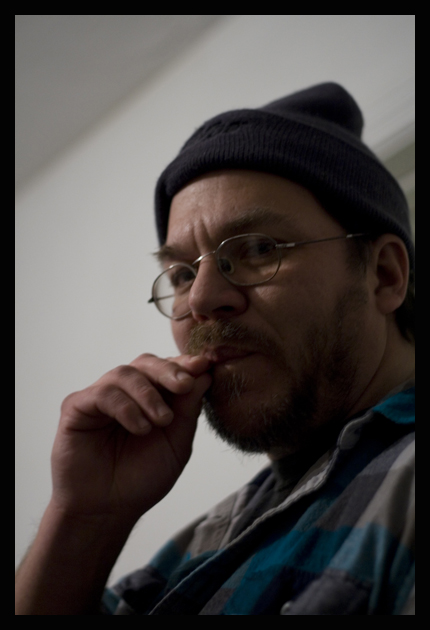 (Best picture I have right now. Perhaps he’ll take his glasses off later tonight and let me have my way. WITH THE CAMERA. God.)

He just needs to tighten up his manscaping skills. He’s already got the “chasing around a spoiled, hyper, stubborn broad” part down to a science, and that’s pretty much 85% of being Bo Brady right there. I’m obsessed with this notion now, of modeling my blue collar boy-toy into something bigger and better, soap opera-caliber even. I’ve already Facebooked and tweeted about it, so you know it’s reached full-blown infatuation level.

I was still cracking up about it today, and felt a strong urge to YouTube that classic episode where Bo kidnaps Hope from the church on her wedding day to LARRY WELCH. (I’m sad that I remember this, considering I was four when it happened.)  I was watching it on my phone right before I took Chooch to school this morning and was laughing so hard, picturing Henry stealing a cop’s motorcycle (Henry LOVES COPS), that I had to frantically wipe away tears. Chooch of course was like, “What the fuck are you watching? That looks really dumb.” As does anything without cursing and nudity.

Now I’m really inspired to have someone propose to me just so I can see if that will dupe Henry into crashing the wedding and marrying me. Because god knows, bearing his child sure hasn’t.

8 Responses to “My Own Bo Brady”