We entertained Kim, Chris and their friend George on Saturday. And when I say “we” I of course actually mean “Chooch” who gets so excited about having company that he doesn’t even fight us when we tell him to put on pants. The illustrious Jimmy Wenger even graced us with his presence. When I introduced him to Chooch as “Jimmy,” Chooch nodded knowingly and said, “Oh, Jimmy Wenger.” At least I know Chooch is listening when I blabber endlessly about my ghost hunting adventures.

Don really took to Jimmy, who brought with him two bottles of Asti which I pretended to open on my own, but really it was all Chris. Jimmy also brought his ghost-capturing camera and spent a large portion of the night photographing all the spirits in my house. Don’t worry, he said they were all very mild and docile. 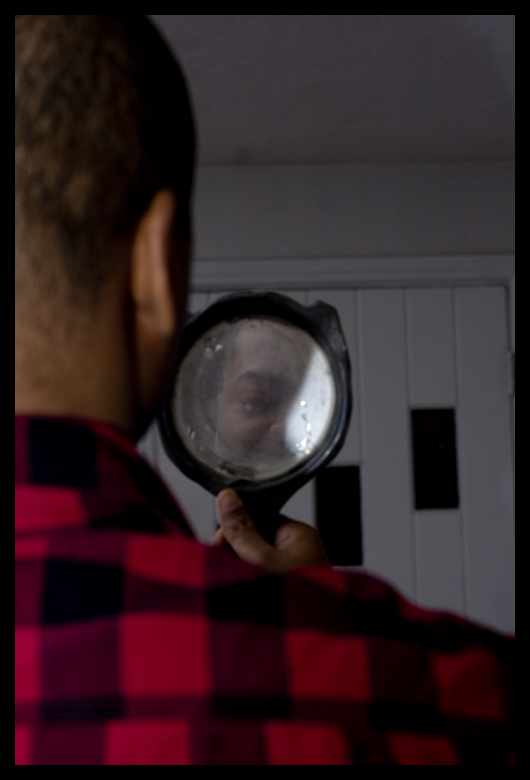 I was hoping someone other than George’s reflection would show up in the mirror, which made Henry shake his head and scoff like he does when watching “Jersey Shore.” (Which he does, by the way. He watches “Jersey Shore.”)

Kim’s friend George had just bought Last Night on Earth earlier that day and brought it with him. I was afraid to make any commitment when he asked if we wanted to play because board games of that elaborate nature intimidate my patience and attention-span. And also my intellect, in that it makes me woefully aware of how little I have. But once Chooch went to bed, after delighting the masses with his sassy remarks and toothless-lisp (like when Kim had the audacity to ask him what his painting was of and he said, “Oh for god’s sake, it’s monster brains!” and then made me take it off the wall and write it with a Sharpie so that no one will ever insult his artistic impressionism ever again), I decided to put my preconceived notions regarding gaming behind me and then laughed as Henry pretended to be literate by burying his furry face in the 8,000 page instruction manual. Jimmy quickly deduced that this wasn’t going to be some short pleasant stroll through Candyland, so he said good night before we (i.e. the boys) started laying out the pieces.

Everyone but Kim and me took a stab at the rule book. My motto is basically, “You tell me when to roll the die, and I will roll the die. Then when I draw a card, I will pretend to read it and then give it to the person closest to me who is not named Henry and have them read it and tell me what to do.” This worked quite well for this particular game and I even started catching on during the LAST ROUND, when I went to play one of my cards, paused and said, “Wait – that would be stupid at this point, right?” George politely concurred but Chris was like, “Yeah, you dumbo!” and then made all kinds of hateful noises while Kim gave me sympathetic looks and mouthed, “I know exactly how you feel.” Assuming I knew how to read lips.

But I’m getting ahead of myself!

Henry was Father Joseph; I controlled ALL OF the zombies. Obviously my goal was to kill all of the humans, but all I could focus on was killing Henry’s fucking chaste character. I was irritated with him because he knew we were having company that night, but waited until they GOT HERE to go to the store and get snacks. I guess some of that can be attributed to the fact that we are notoriously blown off by people. I can’t tell you how many countless times we (haha “we”) have cleaned the house, bought beer and wine, made preparations to order pizza, only to sit by the window and wait for no one to show up. Granted, it was always the same two people who pulled this stunt on us, one as recently as three weeks ago, both habitual liars, but it is really sad how we now just expect everyone to do it. Meanwhile, Kim and Chris aren’t social assholes and showed up like they said they would, prompting me to have the urge to act super-giddy and over-the-top excited, like I’ve never had people over before in my life. Luckily, my naive amazement was eclipsed by a hyperactive child, so they probably didn’t notice how excited I was to bring out the plate of cheese.

Did I mention I controlled ALL OF the zombies? I was well-hated Saturday night. I think Chris hated me the most. I’ve never been called a bitch in one sitting so many times in my life! (To my face, anyway. Except that one time I beat all those Koreans at gymnastics.) I would have held it against him if I hadn’t been so preoccupied with the memory of how wonderfully rich his homemade Dutch apple pie tasted.

Anyone who brings pie to my house is a winner.

Henry was irritated that I chose to play the game on the floor in lieu of sitting at a table like normal adults worried about the curvature of their spine. He complained about it a lot the next day, too, but I’m pretty sure he was just projecting his anger at getting KILLED BY ZOMBIES the night before.

Yeah, that’s right. Father Joseph BIT IT at the hand of my zombies. Ooh, how I relished snuffing out that motherfucker. Henry acted like he was happy about. “Oh good, now I can stand by myself in the dining room and not be a part of this epic game and feel completely left out but not show it.”

Did I mention the awesome soundtrack that came with the game? It brought me back to my goth days, for sure.

Anytime the “humans” didn’t like the way the game was going (usually every time I drew a card that allowed me to be awesome in my undead actions), they would all blame George, since he wrote the rule book. In the end, my zombies were defeated, but in my heart, I was still a winner. Because I killed Henry, which was exactly what I set out to do.

Jimmy Wenger just sent me this picture he took:

This is how we always pose: Me smiling like a ditzy farm girl while using Henry as my dumb-faced man-shield. Imagine him in a tux and me in a white dress with blood splattered all over it and we’ll be able to save ourselves the future financial blow of hiring a wedding photographer. (As if.)

God, Henry is so dumb. How do we even HAVE friends?

9 Responses to “Saturday Night In Pictures”