Since the middle of March, I had been going through life incorrectly informed on the date of Easter. This is, of course, Henry’s fault, who told me, “Oh, it’s April 4th” when I asked him.

You’ll note that April 4th is not even a Sunday. That slight in information apparently didn’t raise any suspicions in me. Not even when I sent out Facebook invitations for an Easter egg dyeing party and scheduled it for Saturday, April 2nd, i.e. “the day before Easter.”

Meanwhile, I was looking at the calendar for Chooch’s school and noted that Sarris Easter candy pick-up is April 7th. I freaked out. How was I going to tell the people who ordered candy from Chooch that it wasn’t going to be here in time for Easter basket grass-strangulation? This was appalling to me and made me hate Chooch’s school even more.

And when one of my old friends from school suggested getting our kids together “two Sundays from now,” I was like, “I guess this dum-dum doesn’t know that’s Easter.”

It was sometime last week when I found out Easter is actually the 24th. And none of my friends even questioned why I wanted to dye eggs so early. They’re so sweet. (And also probably know not to question my motives.)

I appreciated that Kara put so much effort into it. She was the only one who used the piece of shit egg-stamping kit I threw in the cart when Henry said, “Don’t get that, it looks stupid.” Well guess what, Henry, for the third time in 10 years you were right. It’s still all your fault, though. And then he had to prepare all the dye, of course, and was beyond irritated that Chooch and I had previously opened some of the kits and mixed things all up. For the third time in my life, I thought Henry was going to walk out on us, send his mom over later to pick up his belongings.

No one could remember who did the pretty blue and pink spotted egg so I quickly took credit. Meanwhile, I’m pretty sure I only dyed two eggs before growing bored: the first one I lost, and the second one of course had a weener drawn on it, which didn’t turn out well but Gina promised she knew what it was.

Henry’s son Robbie stopped by with his girlfriend Karen. They wouldn’t dye any eggs, preferring instead to spectate. Then they put their pretenses aside and retreated to the other room to watch the hockey game and talk to Henry. (Who chooses talking to Henry over dyeing eggs? Over anything?)

The good thing about my friends is that when Henry leaves the room, I don’t have to seamlessly sink into parenting mode, because my friends are there to do that for me. I do not have the time to make sure my kid isn’t swigging from dye cups. I’m not even sure Janna dyed any of her own eggs because she was too busy helping Chooch with glitter and sequins and making sure he didn’t die of negligence. 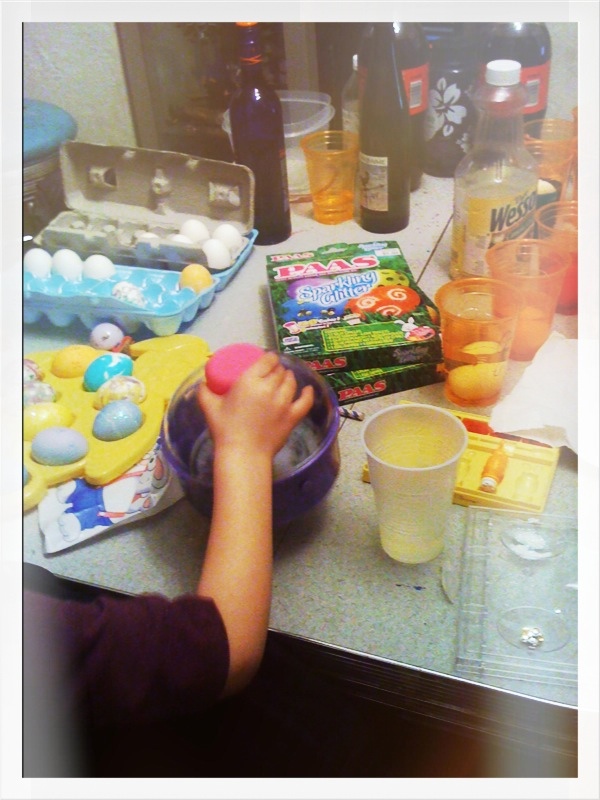 And I appreciated that when Chooch mistakenly plopped an egg in Gina’s cup of wine, on which I painstakingly went through the motions of Sharpie’ing her name and the words NOT EGG DYE which might not be very beneficial to four-year-old non-readers, she was like, “No, it’s cool” and just drank around it.

She must have really enjoyed this new way to quaff wine because she spent the rest of the evening watching Chooch play some stupid Pokemon game on Wii, so that means they’re BFFs now. In Chooch’s book, anyway. 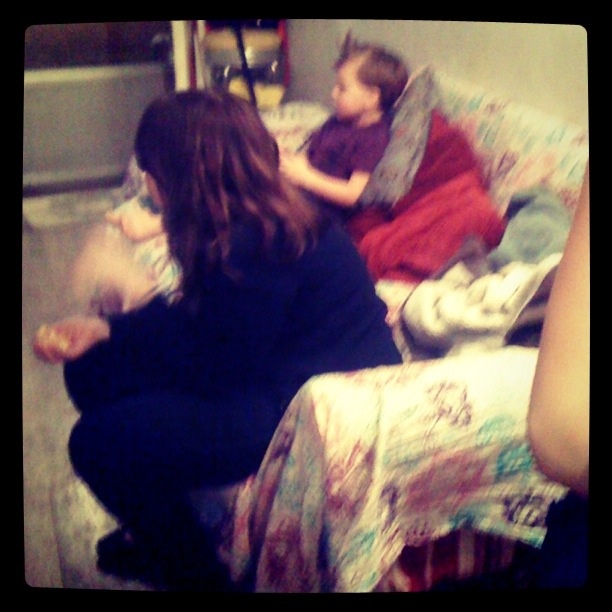 This might have been one of my most poorly-planned parties ever. I’ll start planning next year’s tomorrow.

I woke up feeling like complete shit the next morning. I mean, a hangover is the natural end result of a night of Easter egg-dyeing, right?

4 Responses to “The Easter Egg-Dyeing Party”