And no, I’m not referencing your cheating ex-wife’s vagina.

About a week before we left for Tennessee, I turned to Roadside America to help us map out a route. By the time I was done adding side-excursions all over the west side of West Virginia, our 8-hour drive had morphed into a 12-hour trek.

Henry was totally not OK with this. But I begged him, out of all the roadside attractions, to let me keep the Mystery Hole. It was on our route!

That morning of our departure, I was up by 4AM, packed, showered and rearin’ to go. Too bad Chooch and Henry didn’t wake up until 7. And then we didn’t even leave until 8. Henry argued that we could go to Mystery Hole on the way back home and I threw a substantial fit, pointing out that it was only open until 4 and how could he be sure we’d make it.

So we didn’t speak for awhile. I stared at my framed pictures of Jonny Craig to punish him. He hates when I openly lust like that.

But then Jessi texted me from the road (they had departed from Michigan but pretty much were looking at the same arrival time as us) a few hours into the trip and said they had been snagged by some traffic and weren’t expecting to make it to Gatlinburg until later than anticipated, so we should feel free to be leisurely and linger at any roadside stops we might pass on the way.

I read this text out-loud to Henry in my best “INYOURFACE” voice and then smugly said, “Mystery Hole. We’re going.”

And getting there was half the fun! And not just because Henry had to rely on my shoddy map-reading skills*, but because the town in which it’s located (Ansted, WV) is creepy as shit.

*(GPS is for losers. And couples who don’t like having incessant explosions of domestic  violence underneath the fuzzy car roof.)

I’m already planning a daytrip back to Ansted with props and costumes because it’s crying out for a photo shoot. The bus stops looked like open-air outhouses; there was a bar in an abandoned warehouse and you just know all brands of rape, animal sacrifice and baby-roasting goes on in the back next to the collection of scrapped, blood-soaked vehicles from unlucky travelers who get lost because they don’t use GPS; every other house was boarded up; tiny churches  sat flush against the woods. There was even a Civil War encampment.

In other words, there was nary a Starbucks to be found in Ansted.

But once we passed through “downtown” Ansted and started traveling up into the mountains, it got even better. Ramshackle sheds, confederate flags, cinder-blocked cars eaten by rust. Most of the houses looked unlivable and I’m sure each had a clothesline out back, pregnant with damp overalls. It’s the kind of place that makes you want to get out of the car and tempt fate, see if you can get chased away by a shotgun-toting hillbilly in faded camouflage stained with underarm sweat and Skoal-tinted slobber.

And then this appeared on the left hand side as we reached the top of a crest:

One of the tips on Roadside America warned that it was easy to miss. I hope they were being sarcastic. How the hell does someone miss something that looks like Sid and Marty Kroff spent too much time in the mountains subsisting on little else but Moonshine, mushrooms and sardines and then vomited all over the side of a Quonset hut after plowing into it with their VW? The whole compound was a fluorescent host for tetanus. Just how I like my roadside attractions: colorful and deadly.

For Chooch and me, this was a real feast for our eyes, a nice break from all the mountains and nature bullshit we had been subjected to. But Henry, who I’m pretty sure is color- and fun-blind, didn’t seem fazed by this wondrous explosion of Flower Power.

“Now what is this supposed to be again?” he asked all curmudgeonly.

“Um, only the most awesome place in the world!” I exclaimed in my teenaged “duh” tone. He kept looking at me though, waiting for a real answer, until I mumbled, “I don’t know, it has something to do with gravity or something.”

Real Talk: I only really wanted to go because one of the Roadside America tips likened the proprietor to the Soup Nazi, saying that he denied her entrance because she kept her camera in her coat pocket instead of returning it to her car, even after his wife laid out the rules of the land for her. So the woman’s husband took the camera back to the car, leaving his wife to be continuously chided by the Mystery Hole gate keeper and he still refused to let her enter because she BROKE THE RULES.

I had to see this guy for myself.

I also wanted to see the unbelievable.

Tickets for the tour were $5 and we purchased these inside the technicolor gift shop. The woman at the register, whom I can only assume is Mrs. Mystery Hole herself, ran down the list of rules to us and never once cracked a smile.

“And no large purses,” she finished, giving me a hardened stare. I took my purse back to the car. I was totally not trying to get kicked out of the Mystery Hole like some emasculated husband in the doghouse. (All of these photos were taken post-amazement of the Mystery Hole tour.) 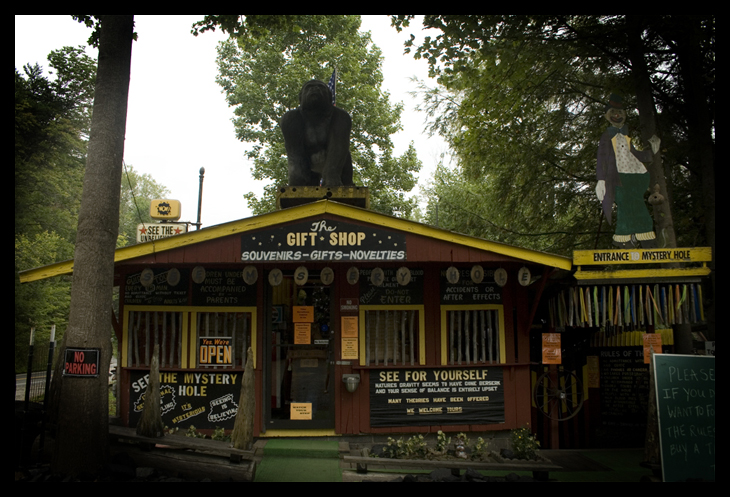 Not a huge fan of Mrs. Mystery Hole, I gotta say.

Mountains: still a novelty on Day 1

Still waiting for the elusive cow bell, I gave Henry a spontaneous hug.

He looked at me all wide-eyed. I never hug him in front of people, and there were definitely a few people milling about. “What was that for?” he asked skeptically.

“I’m just so happy to finally be here! I’ve wanted to come here since….” I quickly thought about how long it had been since I found it on Roadside America. “….last week.” Henry just sighed and walked away.

And then the cowbell happened! I grabbed Chooch’s hand and together we ran to the entrance like the uncoordinated idiots we are while Henry and an older couple walked like regular people behind us. I wanted to be in the front of the pack, up close to Mr. Mystery Hole (whose name is Bill, by the way) and his crazy “I collect soiled underwear” eyes. Bill, a slender man with an eccentric energy and slight mountain drawl (he and his wife are actually Michigan natives, if we are to believe my Internet research), reiterated the rules to us and then asked if any of us have heart problems. We all said no (Henry lied) and Bill asked me if I wanted to see a rattlesnake egg.

“Sure, why not,” I answered and cupped my palms for him to place a small manilla envelope, which immediately vibrated wildly in my hands and emitted a loud rattling noise, causing me to shriek and hurl it to the ground.

Everyone laughed at me because they’re assholes.

Bill retrieved the envelope and opened it up to show me that it was just some stupid rubberband-rigged gag, which I have totally seen before yet STILL fell for.

“Does anyone here know why there weren’t actually rattlesnake eggs in here?” Bill asked. The old lady in our group answered, “Because rattlesnakes don’t lay eggs.”

Smug bitch. I choose to fill my brain with important facts, like shit about music and serial killers, thank you.

“And by the way,” Bill said teasingly to me. “Your heart’s just fine.”

I kind of liked Bill after that.

He opened a gate and led us down a relatively steep ramp into the basement of the souvenir shop. Even moreso than outside, the interior was steeped in the stench of the ’70s. It smelled of moth balls, musk and the sweat on a paisley-print A-line dress after a long night of dancing to ABBA. It was also quite damp and there were probably impressive arrays of fungi growing in the darkened corners. Random memorabilia from the ’70s lined the walls and one small room even glowed with the power of a black light in case we weren’t comprehending that we had traveled back to the Me Decade. I’m sure it brought on a flood of memories for Henry the Elder.

And there were mannequins.

I wasn’t sure what any of this had to do with the Mystery Hole, which was actually the largest room down there. We had to enter it by walking up a ramp and then down a ramp, at which point we found ourselves unable to stand upright and needing to grip the wall to keep from falling. Bill instructed Henry, Chooch and me to sit on a couch, while the other two leaned against the wall. Bill then walked with an extreme lean to the front of the room and began showing us a variety of gravitationally-impossible tricks, like balls rolling up a hill (which I’ve seen before in Laurel Caverns and sorry, Bill, but I do understand how that happens), water flowing uphill, and Bill being able to sit on a chair perched on nothing more but a small nail in the wall. He then had Henry, Chooch and me hold out our arms in front of us and try to stand up. We couldn’t, because while it appeared that we were sitting normally, the way the room was set up we were actually almost laying on our backs. (Henry would never have been able to do this even if he was sitting on a couch in a room with normal gravity. Because he’s old, remember?)

The old couple politely declined Bill’s offer for them to sit on the couch after we unsuccessfully struggled to get up.

According to the Mystery Hole website, those who don’t ask questions are the unintelligent ones. But when asked, none of the people in our group asked any questions (though Chooch had repeatedly whispered to me, “When are we leaving? This place is scary.”), so I guess Henry shouldn’t have been the only one I was calling “Dum Dum” all day.

Besides, I would have only inquired, “When do we get to see the basement?”

They had a guest book in the gift shop, which I happily scrawled “Stoked to be here!” after my name. Henry frowned. But in his own words: “It was pretty cool.” That’s a big deal for Henry to admit.

Bill was high energy, full of jokes and showed us some cool parlor tricks. Totally worth the slight detour and $5, and I would tell any one of you to go there and be amazed. But probably more by the tacky decor and crazy blue eyes than the actual “gravity defiance” show.

I was still riding a Mystery Hole high hours later in the car. “I didn’t think the tour guide was an asshole at all. In fact, he seemed to really like me. He paid a lot of attention to me.”

“I wonder why,” Henry smirked, lowering his eyes to my cleavage.

The next day, we were tromping around downtown Gatlinburg when I noticed Henry was acting weird and off-balance.

“What’s your problem?” I asked with my usual lack of compassion.

“I think Mystery Hole really fucked me up,” Henry moaned. “I haven’t felt right since we left there yesterday.”

Well, there is a disclaimer for that.