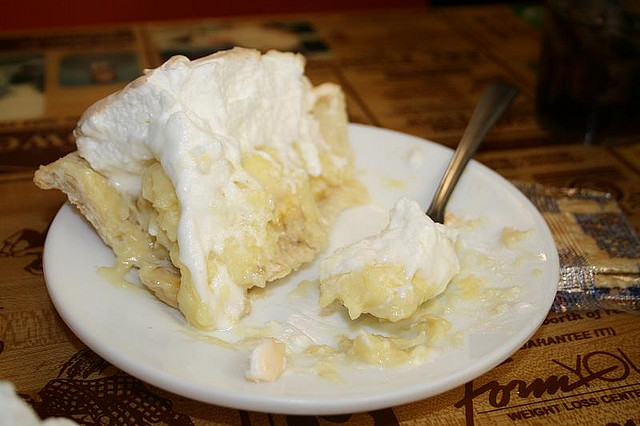 I love pie. For years, I’ve wanted to have a pie party but usually complacency sets in and I put it on the backburner.

But then Henry made an avocado pie for my mom’s 2010 Labor Day cookout and it was smooth as silk, tangy, rich and to be honest, I just closed my eyes and smiled while thinking about it. He even made a citrus-tinged whipped cream. I’m always looking for excuses to have him bake pies, and since last year’s pie party was such a toothy success, I decided to have another one! (Actually, it was decided by the hungry masses who have been “casually” asking since last October 10, 2010, “Say, when are you going to have another pie party?”)

It’s going to be held at a pavilion in South Park, and the invitation is open to any local person reading this who has a propensity for pies (or anyone who likes pies enough to travel to Pittsburgh!). I’ve decided that we’ll have alcohol at this fall fete because I can’t imagine spending an autumn day outside, eating pie, with NO MULLED WINE to wash it down.

(I probably will procrastinate on the mulled wine front, and end up just bringing regular wine. Besides, I don’t have a cauldron. So if you want to BYOWorB, be my guest! The alcohol permit is $50 so if anyone wants to chip in a buck or two, that would be magically fantastical. Last year, we didn’t get a permit and smuggled in 4 bottles of wine, and I couldn’t relax the whole time because I thought every single car that drove past was an unmarked park ranger ready to arrest me. This year I decided it was worth paying the extra money so now we can do kegstands if we want without hiding behind a porta potty.)

If we’re not friends on Facebook, here is the official event notice:

A Pavilion in South Park, TBD (Look out for my telegram. Bring your decoder ring.)

Please pop a squat with me beneath a pavilion on a (hopefully) pleasant autumn day, plunging plastic ware into a plethora of piquant pies.

Please present one (1) pie for passage; a paltry price to pay for a party pinioned by prestigious proclivity.

Leave all picky palates at the plantation and come get your piper pied!
———————
In other words: let’s eat the crap out of some pies.

Last year my mom was supposed to  make her amazing butterscotch pie. It could anally rape you and you wouldn’t even notice it, it is THAT good. But she didn’t make it, and considering that we haven’t spoken since last Christmas, I’m not banking on a special delivery of gooey butterscotch in a pan this year either. So I might be cajoled into baking the only pie I’ve ever baked in my life (not including the raw pumpkin pie that left my ex-boyfriend with a persnickety duodenum): a succulent pear pie.

If you would like to attend, please let me know! Even if we’ve never met before, what better way to say hello and swap saliva than with chunks of cherry pie falling from our mouths like the remnants of that Civil War reenactor we cannibalized last Arbor Day?

One Response to “A Proper Pie Party, Part 2: Electric Berry-loo”