Two years ago, I wrote this:

My daughter lives above a BAIT SHOP??

One of my favorite movie quotes is from a 1980′s b-movie called Back to the Beach. I’m not sure if that was the start of it, but I’ve long been infatuated with bait shops. I’ve never been in one, I’ve never even gone fishing. But I’m obsessed with the gritty imagery that my mind conjures when I think of a bait shop.

Sometimes, I accompany Henry to his place of employment. On the way there, we pass this dingy shanty-like bait shop marked by a hand-written sign that boasts “Live bait. Worms. Fishing Suply.” I’ve been staring dreamily at this bait shop for four years now, and not once in those four years has anyone corrected the spelling of “suply.” It’s endearing.

My new job is a block away from Henry’s, and the fact that I drive past it every day on my way there might just be a coincidence to some; but to me, it’s kind of like a stripper swirling down a pole, her pasties flashing IT’S A SIGN in bright pink LED.

Bait shop, you’re calling my name. I do not know why. Maybe I was a fisherman in a past life, or bait, or maybe I was killed and buried behind a bait shop. But what I do know is that I want to go there, talk to its proprietors. (I believe it’s a husband-wife force; I saw the husband weed wacking yesterday and I’m unsure of which hurt the weeds more: the brutal annihilation served up by the weed wacker, or the vicious verbal rampage the husband appeared to be hatefully funneling at them.)

I had this great idea that I should go there and ask to shadow them for an hour or two, get up to my elbows in bait shop grease. Find out what makes a person go into the baiting biz – carrying the family torch? Addicted to the slithery squishiness of worms? Easy to snag a job after bait school?

I’d probably lie and say it’s for school (my classic excuse) so that I can take pictures of them, too. And maybe I’ll get lucky and snag a sound byte from this seven foot homeless man who loiters in the vicinity. You all know how much I love the homeless, maggots in their beards and all.

But Henry thinks this is a horrible idea. Like, they’ll be so aghast and threatened by my request that they’ll fillet me on the spot and sell my toes as bait. Of course, that’s the kind of diarrhea-inducing anxiety that makes me want to do it all the more.  I have this sick desire to do things that make me uncomfortable, and then complain and whine about it to Henry.

Plus, the bait shop sits haphazardly right above a river bank, so it’d give me an opportunity to be within feet of the sickening river, maybe conquer a fear or two.  Or see a dead body washed ashore, who knows.

Oh, and there’s a pier in their backyard, and I’m kind of obsessed with that shit, too. I don’t know, all these things add up to a big cream-filled YES to me. 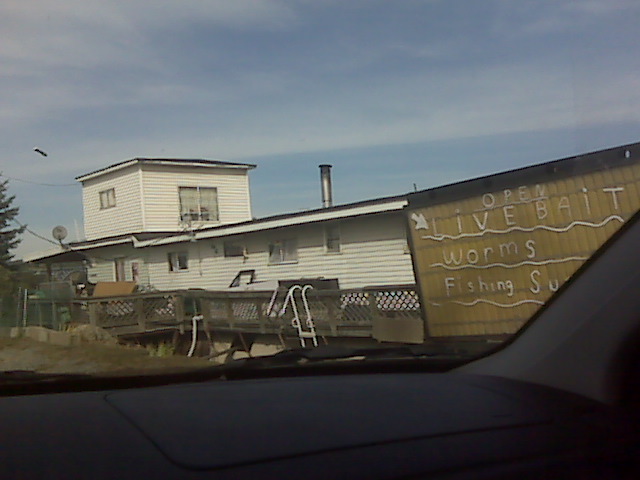 EDIT: I just found out why Henry doesn’t want me going there. It seems that the husband-owner stepped in front of Henry’s car one day and yelled at him for going too fast (I asked Henry how he would be able to stand in front of our car if Henry was driving that fast, and Henry said “Exactly.”) so now Henry’s dickie shrivels in fear at the thought of the bait shop.

The point of reposting this is to inform the Internet that a MOVIE has recently been filmed in that exact location! It’s apparently some John Singleton flick with JACOB FROM TWILIGHT OMG YOU GUYS. No seriously, it’s called “Abduction” or something and it’s supposed to be a thriller, and last time I checked no vampires or werewolves had parts in it.

Henry said that they fashioned a new sign over top of the old sign. It says Pachenko’s Bait Shop or something now, but he thought it might just be there for filming.

So, when this movie comes out and you see this extremely lush and bountiful setting, that’s not bleak or run-down at all, think of me, my friends. Think of me.

If anyone wants to take me to a bait shop, let me know.

(P.S. I did go back there to do my fake interview, with Bill and Jessi two winters ago. We were practically chased off the property with shotgun blasts sounding in the sky behind us. Not really, but the dude very disgustedly assured us that “this ain’t no business.” It was scary. I can only imagine how agitated an entire film crew must have made him.)