People are calling the great snowstorm of 2010 all kinds of knee-slappingly annoying things like  “snOMG,” “snowpocalypse” and “snowmeddegon.” Witty. Catchy. Obnoxious. You know what I call it?

I’m trapped in a house with a bearded asshole and a strong-willed three-year-old who can turn simple household items into parent-killing weapons. And there is nowhere to hide. Except for maybe an igloo but architecture has never been my strong suit. Or manual labor.

And how am I supposed to have my lovers court me when the snow has practically Siamesed Henry and me? This is just great. Really fucking fantastico. And if I hear one more deranged son of a bitch sing the snow’s praises, I’m going to use their body as a cushion the next time I go ice-fishing. Snow is only awesome if you’re a kid and school gets canceled. Well, I’m an adult. And my fucking WEEKEND WAS CANCELED.

Most of the weekend was spent whining, catching up on DVRd TV, whining, watching the Penguins lose and whining, exercising, whining on the Internet, reading, falling victim to springtime mirages, drinking wine and lots of it.

Anyway, it appears that everyone is showing off their Snow Attack pictures, so here are some of mine.

Henry said we got “like, 20 inches.” However, people nearby are saying it was actually more than that. I’m like, “Once you hit a foot, who needs to bother with accuracy?”  Once Henry started shoveling, Chooch was nearly usurped by a foreboding snow wall, and that was kind of cool.

I decided it would be in my best interest to cannonball off the porch, right into the thick of it. I was wearing black cotton exercise pants. The kinds that stop right at the knee. While I had boots on (technically rain galoshes), that didn’t stop the snow from snaking inside the opening and raping my bare calves with its frozen embrace.  Then I started jumping closer to the sidewalk, which would create mini avalanches and unravel Henry’s hard shoveling work. Ooh, he was so pissed!

For all you fans of Henry’s “mehoover” LiveJournal, Hot Naybor Chris was outside shoveling to0. Henry puffed his chest out a lot and tried to look like a skillful shovel wielder, but I don’t think Chris was paying attention. Chris is the closest thing to a friend Henry has outside of work, and he instinctively clenches anytime he’s trying to bro-up with Chris and I’m around. Something about me ruining it…? My favorite Chris memory was one summer, years ago, when Henry was mowing the lawn and Chris was helping out by bagging up the cut grass. In a fit of immaturity (which isn’t actually a fit as much as it’s just my natural demeanor), I took the camera up to the bedroom and began snapping spycam pictures of the two of them. However, it was dusk so I used the flash. Chris caught the flashing light out of his periphery, spun all around, and yelled to Henry, “Did you see that light?” Henry, knowing exactly what had happened, shrugged. When Chris went back to bagging the grass, Henry shot me a threatening glare.

It was awesome. One of the highlights from our long nine years together, I think.

Later in the day, one of our other neighbors needed help shoveling out her car. Because Henry has a man-crush on her boyfriend, Mark, he suited up and sprinted out the door to help. One time, Mark approached Henry and caught him off guard with a bro-shake. I must have laughed for hours because Henry looked so awkward and so very, very Caucasian, trying to keep up with the steps.

Anyway, Mark busted me taking his picture from my front door so I had to swing around quickly and pretend like I was interested in the snow-smothered terrain.

Yes, it was an exciting, action-packed day.

And finally, here’s a picture of Chooch’s window. Looks like he won’t be escaping for awhile. 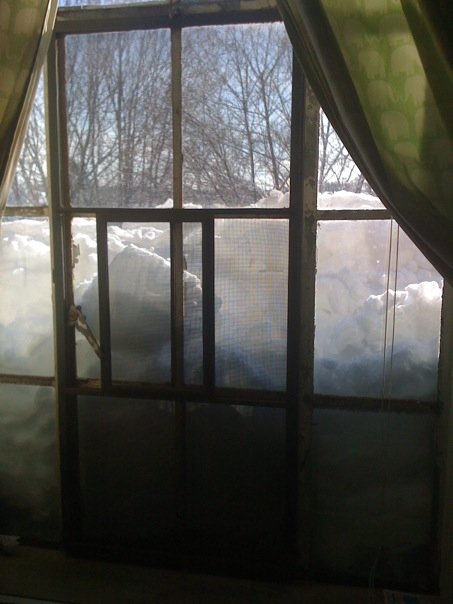 Just a moment ago, Henry was strapping on boots so he can go dig out the car. I said, “Here, I’ll come help you” and then promptly collapsed on a bed of belly-laughs.