One sip was all I needed to know that whatever was inside that cup was less a pumpkin spice latte, more something that could be used in lieu of Ipecac. Shame on me for getting a specialty drink at a gas station in the first place.

“I paid for that!” Henry bitched as I tossed it into the garbage can outside of Sheetz. Thus began a heated argument over the only thing we ever fight about – money. Yay, money! The finale found me contemptuously exiting the car and stalking off down the highway on foot until Chooch convinced Henry to turn around and fetch me from the side of the road (I was stubbornly attempting to walk to my mom’s house), well-rehearsed apology at the ready.

If he hadn’t apologized, we would likely have missed out on a really great day with Jessy and Tommy, who we were en route to meet at the Perryopolis flea market when the pitched latte presented a road block. (And Chooch would likely be without a father right now.) 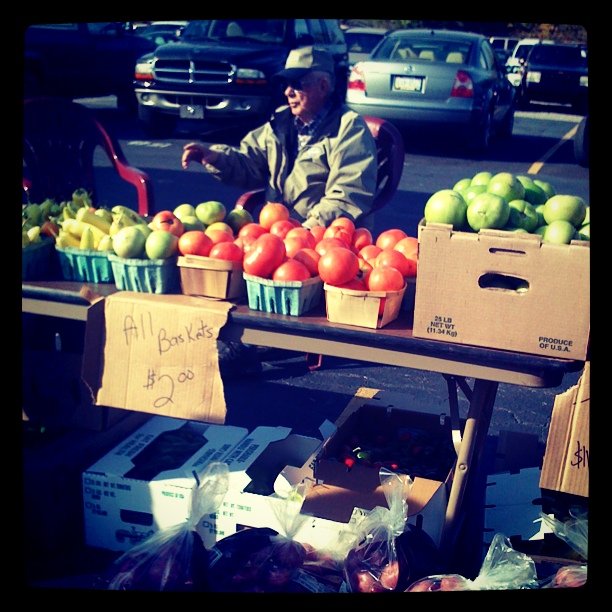 I’m so glad we made it to the flea market, else I might have missed out on the most riveting conversation of all time: Tommy and Henry discussing the merits of some motorized tool-thing called a Roto-Hoe, and pontificating the origin of its name. “Why wouldn’t they just call it a Roto-Shredder?” Tommy asked Henry, clearly not yet figuring out that Henry doesn’t really know anything.

“Maybe something else already had that name,” I heard Henry muse. 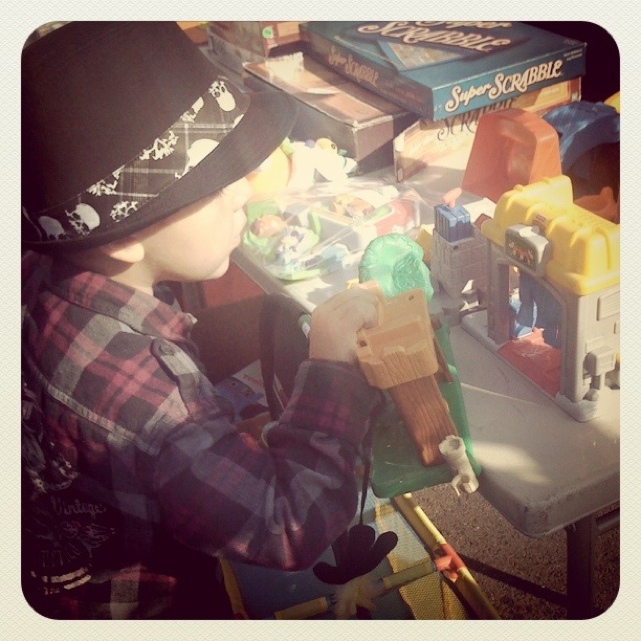 My sole purpose of going to the flea market was to sniff around for the woman who sold me the ring of all flea market rings last August, but she was nowhere to be found. And no other table provided finger-candy nearly as gaudy or with half the brass-knuckle power as her rings. I was saddened by this, but Chooch sure made out. Jessy tried to teach him how to barter, but he was like, “Why? Mommy’s going to buy this for me no matter what.”

I was watching Chooch as he stood near a table while some gnarly shit-schiller bark prices to him like he was a 35-year-old man and not a wallet-less 4-year-old. He looked so amused by it all and had this sort of laughing ‘WTF’ expression on his face. I saw that same look a few minutes later as he was petting a dog at a booth set up to give a carpet cleaning demonstration and it made me realize that as ridiculous as flea markets are to me, they must be really fantastical from Chooch’s point-of-view.

Sundays with Jessy and Tommy have quickly become something I look forward to (even though Chooch groans and says, “Great. Tommy’s gonna beat me up!”). Something about them makes Henry be super nice to me. Sometimes he’ll even hold my hand. Probably because Tommy asks him questions about THE SERVICE and re-masculates him a bit with testosterone-y discourse (for instance, on Sunday they discussed the cost of fishing licenses). That must put Henry in a good mood or something, even though he peed in the flea market bathroom while all the stalls were occupied with pooping bargain hunters;  Henry wouldn’t stop speaking of the horror for a good hour.

Wouldn’t be my preferred nap-location, but hey – I’m sure selling rusty tools and yellow-paged romance novels is really grueling.

Some haggard tart had a boxful of white studded wristbands (supposedly) from Hot Topic. It was the only thing I saw, besides a gigantically horrific $40 painting of some asshole who founded Washington County, that made me inch toward my iCarly pocketbook.

“How much?” Jessy asked the leather-faced broad, who was busy organizing another bin of stolen goods a few feet away.

“How much for two?” Jessy bartered.

“THEY’RE $4 A PIECE!” this fucking landfill souvenir barked. “THEY’RE $8 AT HOT TOPIC, THAT IS HALF OFF.” Oh no she didn’t. This shit-stained remnant of Kool’s packaging from 1974 did not just patronize us.

Henry, who was standing a bit away, looked at me expectantly when I approached him with a wrist decidedly not dressed for next year’s Warped Tour. “I didn’t like her attitude,” I explained. “So no sale for that whore.”

Over lunch, we made plans to take a group trip to Lancaster next month. We ended the day with an arousing game of Depends keep-away at Target, which had me (ironically) nearly pissing myself in the toy aisle. I’ve never laughed so hard in Target.

And to think, a $2.49 cup of coffee almost prevented all of that from happening.

5 Responses to “I Used to Hate Sundays”