In the late morning, Henry and I took a brief walk around the neighborhood – it’s important to still get some air but we still gotta be safe about it so there’s definite strategy and major awareness involved. I was impressed to see that most people we passed were maintaining their distance, but I was HORRIFIED when I witnessed a family of four going into Pitaland–it’s a market so it’s still open because it’s essential, but it is SMALL and gets crowded VERY EASILY. So really? Both parents and two kids all needed to go inside together during a fucking pandemic? What fucking assholes. I bet they didn’t even wash their hands afterward either. Stupid people!

I want to say that I can’t believe there are people out there not taking this seriously, but…my opinion of humanity is not very high.

Henry spent a lot of time working on my huge Seoul Subway wall art over the weekend and I’m so happy about that!

It is going to light up, God willing* and also play the Seoul subway music, which Chooch and I have been obsessed with since our very first subway ride. I need this joy in my life again!

*(I had a friend in high school who would say that. Like, if you were like, “Call me sometime” she would be all “God willing.” I wonder if God is still willing her life or if she took back control?)

Um, then we watched Ready or Not that night, which was so good and I haven’t seen Adam Brody in anything in a good long while and it made me yearn for The OC, ugh he was the best character in both of these.

But fuck, Ready or Not was wonderful. I love horror movies that are also comedic without being an outright spoof or parody.

SUNDAY: I had the dumb idea that we should go out to the “wilderness” for a bit since it was such a nice day. We drove over an hour away to Ohio Pyle, which is in the Laurel Highlands for those of you not from Pennsylvania who maybe feel like looking a map because what else is there to do? WHY NOT LEARN SOME PENNSYLVANIA TOPOGRAPHY*?

*The word “topography” always makes me think of this amazing song:

There’s also a really fantastic version by A Perfect Circle. Shit, I used to love both versions so much. I need someone to hold me now.

OMG Henry remember when I was so obsessed with Jeordie White because of A Perfect Circle and I swear he looked at me at their concert in 2003 and I almost died?! 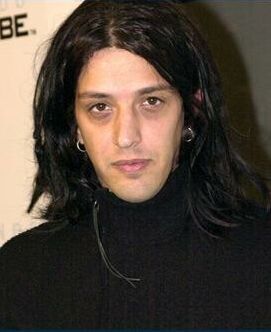 I had a journal at the time that had a little spot on the front cover where you could slip in a photo, and I definitely 100% had that picture up there of Jeordie White in it, much to Henry’s delight.

Anyway, Ohio Pyle was a fucking hot spot, man. I don’t think Fayette County understands the concept of social distancing – there were little restaurants/cafes that were open and people were eating at tables outside! In Pittsburgh, all of the restaurants are now take out only during this pandemic, no exceptions! People were walking in groups! I was fucking screaming!

Luckily, once we got to the actual trails, it was way less dense with humanity, thank the fucking lord. We made sure to keep a good distance anytime we had to pass people, which wasn’t often, but I can tell that this is the last time we will attempt to do something like this for quite awhile, my good lord. I saw a guy sneeze! OPENLY! HE JUST…SNEEZED! STRANGERS WERE COMMINGLING ON A PEDESTRIAN BRIDGE!

I honestly thought I was going to have a nervous breakdown.

As someone who compulsively molests signs and ropes, this warning really made me throw my hands up and retreat in shame.

This was after he pretended to slip and fall off the cliff, which made me scream, “CHOOCH” and promptly succumb to jello-legs. I hate him.

We were mostly alone in the woods, but every so often, I would look behind my shoulder and yelled, “Horde!” and pick up my pace.

“What is this, The Walking Dead?” Henry laughed without mirth. YES, HENRY. IT SURE FEELS LIKE IT. I have never been averse to fellow mankind than I am right now, March of 2020. Get the fuck away from me.

We were obsessed with this jungle-esque little clearing! Then this family came out of nowhere and were practically on our backs, I couldn’t fucking believe it. (Henry said they actually came out of the trail that was CLOSED AND PROTECTED BY THE SIGN THAT IS NOT TO BE MOLESTED.) I started speed-walking in an attempt to lose them and then I tripped and almost fell and Chooch laughed at me and I was like, “Oh OK, you tripped and ACTUALLY FELL ON YOUR FACE 15 minutes ago, at least I goddamn caught myself!” He’s such a little bitch sometimes! IT’S ONLY OK TO LAUGH WHEN HENRY TRIPS, EVERYONE KNOWS THAT.

Which he did, by the way. Trip, I mean. Henry tripped. We all had our turn tripping but Chooch was the only one who fell, hahaha.

Got back in the car to leave and we all bathed in hand sanitizer. (Chooch literally did – he spilled half the bottle on himself because he’s a Big Dumb.)

It’s just instant coffee mixed with sugar and maybe something else, I can’t remember. You have to either stir it by hand 400 times or use a mixer for 7 minutes, I think. Then you dollop it onto whatever milk/milk-like substance you prefer. It’s so strong and sweet! My friend Jiyong made it too and we KakaoTalked photos to each other since we can’t meet up during this time. We also chatted about dramas we’re watching so it felt like I had a little bit of normalcy this weekend, I guess.

I ended the night watching another shitty episode of The Walking Dead, which means that it was on in the background while I edited photos and added books to my Goodreads “want to read” list.

And we lost Kenny Rogers. I’ll cap this off with my all time fave K-Rog song, which I had on a cassette and used to play over and over while rollerskating on my front porch when I was like 8 or 9. Sigh.