Glenn would rather be riding the Wacky Worm.

I have been thinking about what to write all week and I’ve decided that I just can’t put it into words. It was literally like reliving my childhood, from the skates on my feet to the music in the rink to the Orange Crush in my mouth. And being surrounded by my closest friends, most of whom surprised me by actually skating (even Barb!), it was just the best feeling ever. It totally made up for the last several lackluster birthdays.

There were some downsides:

When we arrived at the rink, Henry went to the side entrance to let the owners know we were there a little early. He came back to the front door and asked, “Why do they think this is your graduation party?”

Well, because a few weeks ago, when I was ironing out details with the owner on the phone, we were just about wrapping up the conversation when he said, “And hey, congratulations again on graduating!”

A normal person in my shoes would have corrected him and said, “Oh, no. This is for a birthday, not graduation.” You know, set him straight right away.

And hey, I’ve never graduated from anything since pre-school, so maybe I kind of liked the idea of being a graduate for a night, alright?

Harland, Chris and Kara, post-getting yelled at by Roller DJ for breaking the rink rules.

Mary, Barb and Wendy. This might have been after Barb’s “spill.” I even offered to knock down Janna to take some of the heat off her.

Bill, whom I met when we came to last year’s Pie Party with my friend Shannon. I thought it was so awesome of him to come to my birthday party. He brought his friend Deena who skated for a minute before yelling “OH THIS AIN’T GONNA HAPPEN!” and stormed out. I don’t know where she went, but she never came back. That was the most drama my party saw, however, which is unusual for an Erin Rachelle Kelly affair.

Rink Ref was trying to teach me strides, which is great and all, but I didn’t ask.

“Um, do you like give lessons or anything?” I asked, hoping we could schedule something for a time when I wasn’t hosting a party.

“OK, because I really just want to skate fast, you know?” I said, itching to be set loose.

I caught Henry skating really close to him later on. I fell into place with them and hoped to hear some juicy convo, like maybe what really happened the night Darrel Fell!, but it sounded kind of boring so I lost interest after about 4 seconds like any other time Henry is talking. I later asked Henry what he was doing with him and he said, “Networking.” Seriously? Doesn’t he know that’s what Facebook is for? People don’t actually talk to each other’s faces anymore.

And what kind of networking could one seriously accomplish with a rink ref?

Back in March, I approached Kaitlin, baker goddess, about making me a custom cake for my birthday. I have wanted a Robert Smith cake for as long as I could remember and had it all laid out in my mind exactly how it would look.

Kaitlin exceeded my expectations. When she walked into the rink with it (while The Cure’s “The Baby Screams” was playing, no less!), I nearly cried (I actually did later that night though when I read her birthday card). It was everything I had envisioned, minimalistic and instantly recognizable. Chooch ran by, paused, and said, “Oh it’s Robert” and then kept running.

Oh you guys, that cake. It was hands down the best birthday cake I have ever had. Fuck Bethel Bakery, it’s Zia’s Custom Desserts from here on out. (Seriously, if you live anywhere even remotely close to Western Pennsylvania, you’ll want to get a cake from her. Or macarons!) Beneath the beautiful Robert Smith circa-1987 veneer was layer upon layer of moist vanilla cake and raspberry filling. It was worth being pulled off the rink for. Even if I was forced to stand in front of everyone, dripping sweat all over my Wacky Worm shirt, while the entire snack room serenaded me. Worst part about birthday parties. I never know what to do! I mean, I’m awkward enough without a roomful of people singing in my face, thanks. 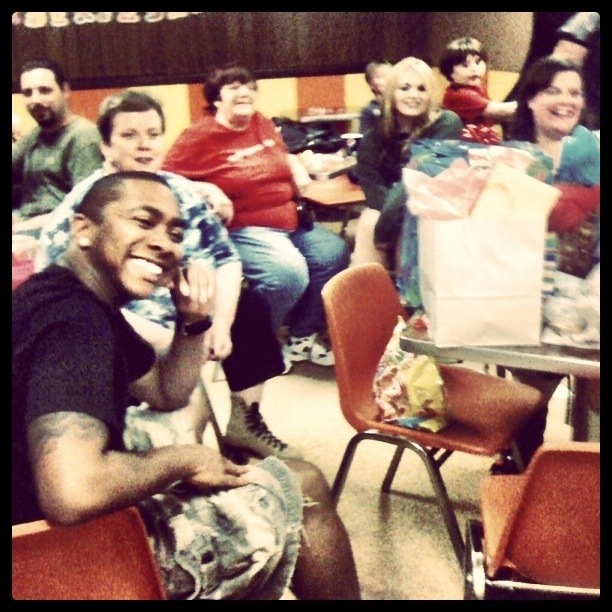 So I took pictures to make them feel awkward, too.

Glenn’s yawning, which isn’t surprising. He IS 50, after all. Also, a pretty great indicator of how much fun people were having. :(

After Henry cut paper-thin slices of cake for everyone (which I bitched about until later when I saw that there was no cake leftover and then quickly understood Henry’s stingy-slicing reasoning; also I think people had seconds and eighths), it was time for me to open presents! Chooch came over and tried to do this for me, at which point I turned into bitchy 12-year-old sister Erin and yelled, “GO AWAY THEY’RE MINE NOT YOURS” so he crossed his arms over his chest and ran out of the room with Barb calling after him, “Wait! I have something for you too!”

She didn’t bring something for me to his party in May.

“Well, I thought you might be more mature than that,” Barb said, but that was right when I realized I was missing “Easy Lover” and started unwrapping faster.

My friend Bill, who was the Kaitlin of my old job (the one with Tina and Eleanore!) baked me BROWNIES. I was like, “Oh shit, Bill’s brownies!” and immediately glued one to my paw. I spent the rest of the time opening presents with a brownie in my hand, even though Barb kept saying, “You know you can put the brownie down, right?”

I got some great gifts! But really I was just happy that people showed up. That was all I really needed. (Ha-ha, what a lie. I wanted presents, all of the presents.)

Jimmy Wenger! He sat next to Jeannie, who strategically wore a dress so she wouldn’t be tempted to put skates on. Then someone pointed out that Blake’s girlfriend Shannon was wearing a dress & skating, foiling Jeannie’s plan.

Three hours went by way too quickly. (Everyone else: “God, three hours at the rink is a fucking long ass time! Shoot it dead!”) I’m happy that some people showed up and skated and I hope everyone had as much fun as I did, because it was like being a kid again, skating to all the songs that molded me into who I am today, underneath twinkling rainbow lights with all of my favorite people (plus Henry). And that is exactly what I needed after the week I had.

To summarize: it was fun and I was the best skater there.

I should have invited the Steel City Rollers, though. Fuck.