Hello this is a blog post from 2011. I’m revisiting happy times and because my life is so dumb, this is the first thing that came to mind?!

Carnies are arguably one of the best things about the fair, especially if they will engage with you. I’m sure a lot of people will disagree with me though, like one of my co-workers who kept sayin, “NO, THE FOOD! THE FOOD IS THE BEST PART! to the point where I thought it was going to come to blows. Which is why I used the word “ARGUABLY.”

I mean, if anything, carnies make people like Henry feel more attractive, I’m sure.

One of these days, I am going to remember my pad and pencil and ask one for an interview. I’m dying to see their lair.

So without further ado, here is a collection of some of my favorite specimen from this year’s Westmoreland County Fair. 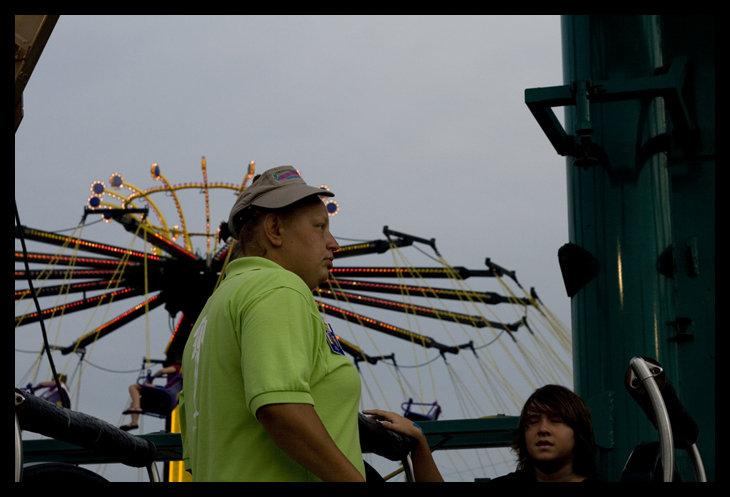 A female carny is a rare sight at the fair and often easy to mistake for just another guy. But if you look past her hardened stare and voluptuous jowls, you can just barely make out the slight outline of breasts beneath her neon polo.

Her name is Cathy and she was not particularly fond of me after I had the audacity to lower the safety bar on my own after Laura and I boarded the Viking, a mini-Pirate ship knockoff.  When she saw my crime, her face became steeped with annoyance and disdain.

“You shouldn’t have done that,” she said in a carny-drawl remiss of any semblance of femininity. I believe I gulped a little and apologized, even though I wasn’t sure what I had done wrong. Cathy shook her head and continued past us to the rest of the riders who weren’t ballsy enough to try and do her job for her.

Luckily, the man behind us found himself to be a bit too rotund to fit comfortably in the seat; Cathy manually released everyone’s safety bar, allowing him to exit. This also afforded me a chance to have a do-over by keeping  my hands off the holy safety bar. Cathy seemed pleased about this.

Before the ride started, I heard her tell the girl behind me to keep her arms inside the ride. “You don’t want them to get chopped off, do ya?” she snarled. But then while the ship was a’rockin’, she stood below encouraging us to flail our arms and emote carnival joy.

“I don’t understand,” I yelled to Laura. “I thought she didn’t want us to have our arms chopped off?!” Meanwhile, Cathy stood down there by the gate, pantomiming being shot in the heart.

“You guys are killing me!” she screamed.

“Wooo!” I cheered, calling forth my best Ben Stein on the Thrill Ride impression in an attempt to appease her. I kept my elbows tight against my side and raised  my forearms  just enough to get my hands up near my face, in an effort to show enthusiasm without becoming That Girl Who Lost Her Arms At the Fair.

Later on, Laura and I were enjoying a casual jaunt on the Yo-Yo when she noticed that Cathy was over on the Viking, doing the same “You’re killing me!” routine. I felt extremely betrayed. I thought that was just for us.

Though I have to say she was pretty much the only carny who even tried to engage us, with the exception of an old, grizzled mountain man carny operating the Yo-Yo who grazed my left boob when he pointed out that I forgot to buckle the second safety belt. That right there is how the fair keeps me coming back.

The No-Name Yellow Ride was back in full effect at the Westmoreland County Fair. You might remember that I have an extreme hate-hate relationship with this mothershitting torture device. I think I even dubbed it the Aerial Pelvic Exam last time. But Laura was willing to ride it all so I felt brave and decided I couldn’t let her leave the fair without taking a spin on this stupid ride. WHAT KIND OF RIDE DOESN’T HAVE A NAME? The kind that wants to be able to skulk away in anonymity in the event of death.

“Can we ride separately?” I asked the young, bronze, supple, handsome, hot, OMGWANTTOSEEHISWEENER carny manning the ride. He gave a slight nod, which I interpreted as “Meet me behind the porta johns at sunset. Bring Saran Wrap, chocolate whipped cream and stirrups.”

That Old Tie-Dyed Bitty is like 80, walks with a cane, and STILL rode more shit than Janna and Henry do.

“I have a crush on him,” I admittedly all breathlessly to Laura, who was sitting behind me. She just laughed but I know that she agreed that if you look past the fact that he’s like, 16, HE IS A REAL CATCH.

I could tell he hasn’t been in the game for very long. His fingernails were clean and his trail of illegitimate children is probably pretty short. And even though he never smiled, I’m pretty sure he had all his teeth. I’m wagering that a wad of Skoal would have rolled out of his mouth had he ever smiled though.

I tried to fixate  on him to keep myself from expiring as the Yellow Ride pendulated us wickedly through the air. I have a vague recollection of Henry and Mike standing on the ground watching smugly as we pulled all sorts of petrified faces. After the thirtieth revolution, I pretty  much lost all will to even scream and resigned to hanging limply over the side of the seat as all the color and life drained from my face. I noticed that behind me, Laura had quit laughing, too.

In some countries, this is how they get people to talk.

Anyway, after the ride ended, I couldn’t unlatch my safety bar. And by “couldn’t” I mean that I didn’t even try because I wanted H-h-h-hot carny to rescue me. But then Laura bounded out of her seat and said, “Here I can do it!” while I was, in slow motion, shouting, “Nooooooo!” He was one car away from putting his hands within inches of my crotch.

Laura was extremely apologetic after that. I COULD HAVE BEEN PREGNANT WITH HIS BABY BY NOW. I would have made her the godmother, too. Good job, Laura!

It’s OK, because later, I made her and Mike accompany me while I photostalked him. Mike seemed a bit unsure about this, probably because Henry was like, right there (as if Henry expects anything else from me), but Laura was a good wing-woman. Probably because she has been reading my blog for so long!

I took this picture after we had been standing there way past the point of “casual pausing.” He looked right at me so I yelled, “RUN!” and then fled with flailing arms. Laura and Mike calmly retreated behind me.

After catching up with Henry, I tried to show him this picture but he just pushed me away and called me a child.

Unfortunately, I did not get a photo of Bingo Carny. We were standing right next to the Bingo tent while Henry was making the longest lemonade purchase of all time, right when a new game was starting up. The woman barking into the mic sounded apathetic and severely lacked the enthusiasm that Powers Great American Midways drills into their game carnies. (The Westmoreland County Fair is powered by Tropical Amusements and it fails miserably in the moxie department. Henry is annoyed that I know enough about the amusement industry to even draw such comparisons, but I could make a pie chart if you want.)

Anyway, the first ball she drew was O69, which she announced as such: “Oh?….69.” Like she was kind of surprised and into it at first, and then bored and unimpressed during it.

And she just kept repeating it over and over, making Mike, Laura and me laugh harder each time. Henry just frowned because he is Big Adult.

After Henry got his fancy lemonade which took so long to acquire it should have been served in a bottle with a Mike’s label wrapped around it, we continued past the Bingo tent only to find out that Bingo Carny, who was definitely as old and worn-out as her voice, was a veritable magnet for facial piercings. Totally was not expecting that.

Not a carny, but just some dad that I hated and couldn’t shake and just sleazy enough that someone should have jammed him into a neon Tropical Amusements polo.

Chooch was riding some dumb kid coaster which didn’t even come CLOSE to rivaling the Wacky Worm, and I was standing off to the side fiddling my camera like the pocket vagina it is. Suddenly, the left side of my body was jolted and paralyzed all at once with a booming cat call of “LOLA!!!!! LOLA!!!!” I visibly jumped and shirked back.

“Sorry,” the guy laughed as he noticed my alarmed expression. “That’s my daughter,” he explained, pointing at some random child on the ride. Then he launched into a new round of “LOLA!!!!!”s as if suddenly I would be OK with this.  I caught Henry laughing at this new uncomfortable situation I found myself in.

His voice speared my brain and conjured up visions of being hog-tied in the trunk of a 1988 Dodge Omni.

Of course, he happened to be everywhere I was for the rest of the day. Fuck you, and fuck Lola too.

[Up next: More random thoughts on the fair, the Jersey Shore Invasion, possibly a Henry interview (I have the pictures, I just need the cooperation!). I have a million more words to write. Hellllllp.]