Do I really need an intro.

This damn ticket to a haunted house is 25 years old. I always keep it tucked into a frame of a picture on a wall so it’s kind of like permanent decor at this point, but I was looking at it the other day when I took it down to dust said picture frame (and by dust I mean I just gave it a good swipe with my hand, housewife who now?) and felt awash with memories. (Or maybe that was just the dust particles.

Some thoughts I had while looking at this ticket:

We finally got Chooch a gaming computer after years of crying for one and begging Janna to give him hers. For the first couple days, he was very grateful and being super helpful around the house but now he’s back to normal. It was nice while it lasted. :(

I was “getting ready for work” yesterday morning (by that I mean I still brush my hair and do my eyebrows because you never know when a surprise video call could happen). Chooch was “in Chemistry” and from the bathroom, I heard his teacher say, “Tomorrow is a special day in Chemistry. Anyone know why?”

“I bet it’s Mole Day,” I whisper-screamed from the hallway.

“Anyone want to try and guess?” his teacher asked again from the computer screen.

“I’m not saying that,” Chooch grumbled, because in his mind HOW CAN A MOTHER KNOW THINGS.

“I’ll give you a hint: it relates to a number in chemistry,” the teacher sounded sad and desperate now, just like I was TO HAVE MY ANSWER PASSED ON.

“TELL HIM IT’S MOLE DAY!” I wheezed, hopping from foot-to-foot in frustration.

“It’s Mole Day,” the teacher sighed to the virtual classroom of stoops.

“TELL HIM I KNEW THAT!” I screamed. “TELL HIM YOUR MOM KNEW!”

“No because then everyone will know that—”

“–that what, your mom is smarter than them!?”

“–my weird mom is being creepy and listening in to  my class,” Chooch sighed.

We are so over each other.

OK you guys look I am really guilty about this because you know how much I LOVED PARKER’S, the local sandwich shop with the cool aesthetic and “we’re all family here” vibes that the owner gave off, and I cried when they announced they were closing, and then I vowed to hate whatever took its place, but LOOK, OAK HILL POST IS THE SHIT, OK? I CAN’T HELP IT. Granted, I can’t eat 90% of what’s on the menu because meat, but their veggie burger is the best around, and the cauliflower soup I had a few weeks ago was garnished with GINGERBREAD CRUMBLES and you can fucking fight me right here, right now if you don’t think it was delicious. And don’t get me started on their fluffy, soft buttermilk biscuits with lemon curd and house jam, omfg.

Anyway, earlier in the week they announced on Instagram that they were going to debut a vegan sandwich. OK, look. I have had “vegan sandwiches” at carnivorous eateries before and it usually equates to the kitchen dumping some basic veggies (zucchini, tomatoes, and peppers generally) onto a wrap and calling it a day. I mean, OK that’s fine. But you’d be surprised at the wide array of disappointing veggie wraps I’ve had in my life! In fact, there was one road trip recently where I had like three in a row that made me want to cry.

But I had a feeling that this one was crafted with thoughtfulness and quality ingredients, and hoooooo boy-o I was correct-o-mundo. First of all, that bread. Thank you for one-upping a basic wrap, Oak Hill Post. Sincerely, thank you for serving these quality vegetables on a high-class carb vessel.

Oh and in between the bread-flaps? MOROCCAN SPICED CELERY ROOT. Did I know that I liked that!? Not until Wednesday. Now it’s all I can think about. Also: lettuce and red pepper hummus. But the celery root was what carried this thing, man. I couldn’t stop eating it and then I was so sick afterward because my stomach is not used to hearty vegan sandwiches, but the pain was worth it. It’s so comforting to know that I have a viable veg/vegan food option within walking distances, right here in my ‘hood. #blessed

I opened Instagram after work and the first thing I saw was Lauren Conrad posting an IGTV video of a Laguna Beach reunion and I was like OH HOLD THE PHONE, dropped everything and watched the entire 30 minute. I was LIVING for it. I loved Laguna Beach so fucking much and I still support LC with my whole heart (well, part of it – my heart is pulled in a ton of different directions).

Almost all of them look / the same so good still! Stephen Colletti especially there I said it.

In an earlier post, I whined about not liking Haunting of Bly Manor but then I finished it and while I still stand by the opinion that it was not scary at all, I ended up really loving it when I realized that holy shit, this is a goddamn love story. I cried SO HARD throughout the last episode (and am crying again thinking about it, I hate myself) that I had to hide my face with a pillow because Henry was sitting next to me and even after 19 years I’m still like DON’T SEE ME when I’m crying.

Then for shits and giggles, I started watching Emily in Paris earlier this week, thinking it was like some Teen Nick show. Nope. Not even. I rarely binge shows but I had this one devoured in two days. It helped that the episodes were only like 20-30 minutes though! Was it cheesy? Yes. Did I learn how to say raunchy things in French? Yes. Is Lily Collins totally fucking likeable? Yes. Will I watch Season 2 if it happens? TRES OUI.

Henry and I watched The Lodge over the weekend. I thought it was really great and pretty scary but he was like, “eh.” I LIKE CULT SHIT and the plot was A+. But seriously, Henry is the worst person to watch horror movies with because he rarely likes one and is “never scared.” I did get him to admit that the only horror movie that ever scared him was It’s Alive, but he quickly clarified that he saw it when it came out and he was “just a kid.” Mmhmm. Anyway, The Lodge was made by the same people who did Goodnight, Mommy, and that movie WAS SO FUCKING GOOD. This one wasn’t as good, but I would recommend it all the same. The atmosphere was so stark and cold, the cast was great (would have liked to have had more Alicia Silverstone though!), and it was actually less predictable than I imagined. Incidentally, it was the second time in a week that we watched something with Riley Keough in it and I had previously never even heard of her (I’m vicariously living in Korea, remember?). Turns out she’s Elvis’s granddaughter.

Oh! And I watched An American Murder or whatever the fuck that new Netflix documentary is called. Chooch started watching it with me but then had to go play Fortnight or something and said he’d watch the rest later and then when he overheard me say something to Henry about the husband killing his wife, Chooch was like WOW OK SPOILER and I was like, “This isn’t fiction though, it literally happened and we already knew it was the husband!?” But yeah, what a fucking demon dick and also the broad he was cheating with wasn’t that great, so nice one, asshole. Also Part 2, I was extremely uncomfortable that they used actual text messages in it, like I didn’t need to know how the wife was horny.

In Korean drama news, I finally started watching It’s Okay to Not Be Okay and I think the real Korean title actually translates to Psycho But Fine….my Korean skills are limited but “psycho” is “psycho” in both languages, so. Anyway, only 2 episodes in and I love it but show me a Korean drama that I won’t love, truly. The reason I was finally pushed to watch it is because the main character is a, well, psycho writer of children’s books, and the books featured in the show (dark fairytales in the vein of Tim Burton and Neil Gaiman) were made into actual books and I really want to buy them to use for learning purposes, so maybe if Jiyong and I ever get to hang out again I can bring cute books instead of text books and we could read those together instead while she makes me repeat the hard words over and over until my tongue swells and then I start hating those books, god I miss those days. 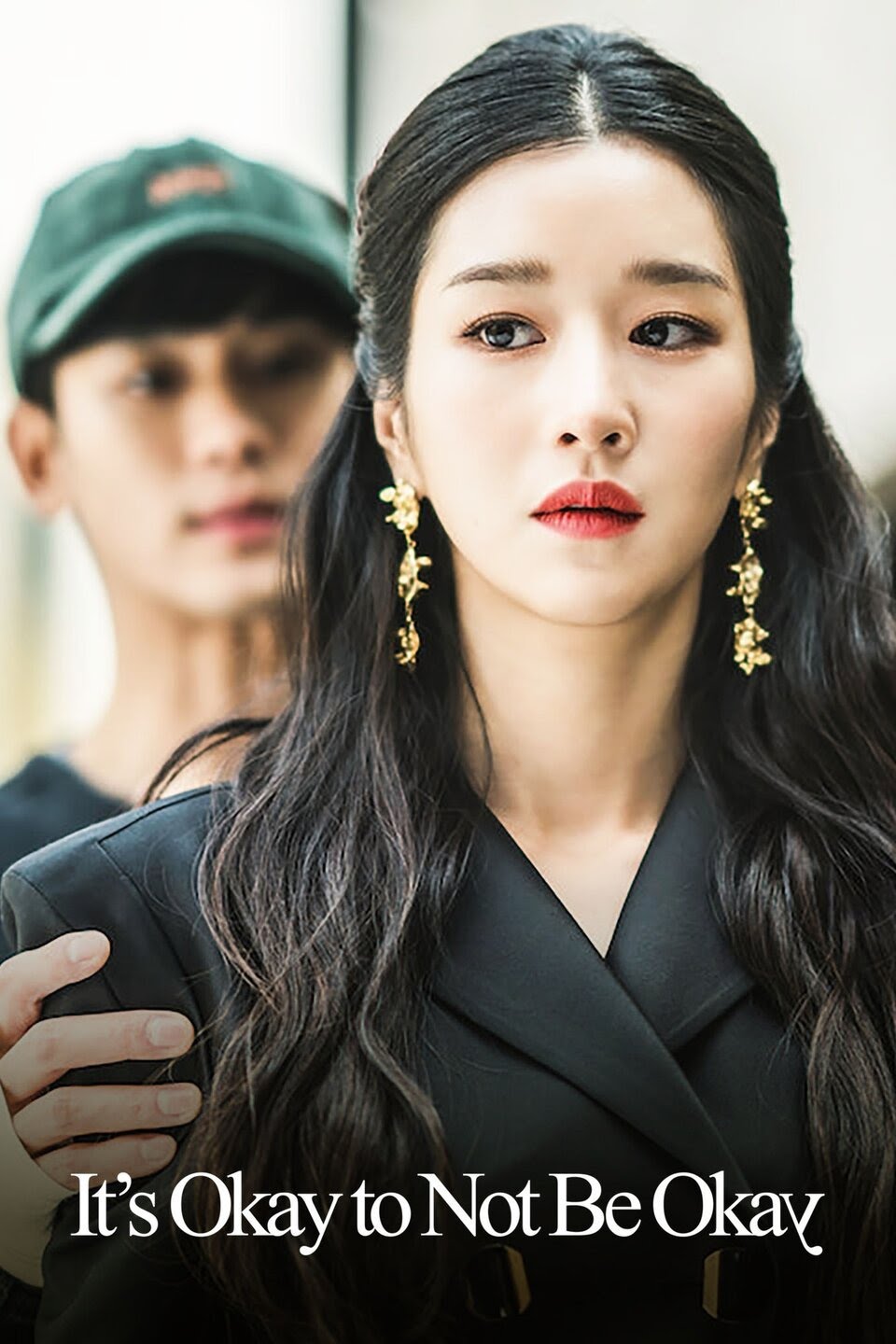 Honestly, I can’t recommend Korean dramas enough, especially now that all there is to do is binge shit. I have been trying to get JANNA to watch one BUT SHE HAS NOT DONE SO YET WHAT A BITCH HI JANNA.

Anyway, today is my last day of work before my annual Halloween Vacation starts so cheers to that, etc etc.