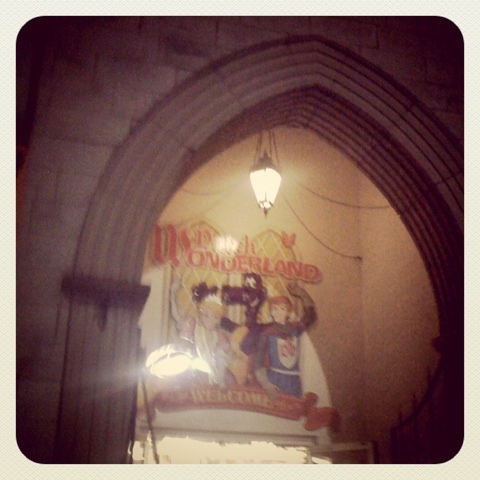 After a day of Amish-spotting, it was just getting dark as we drove back to the hotel. To the right, we saw a wide expanse of Christmas lights so Tommy pulled into the parking lot so we could see what was going on. It turned out to be Dutch Wonderland, a small amusement park I BEGGED Henry to take me to the last time we were in Lancaster but he was all, “This is a CHILD’S park!” OK, and? Turns out that Dutch Wonderland has special holiday hours, complete with a “spectacular light show.” Admission was only $11.95 and I guess Henry figured Chooch and I deserved to cut loose after spending all day looking at arts and crafts, our least favorite past time. Tommy and Jessy opted out of the adolescent festivities, but I really think they would have enjoyed it.

It was already 6pm by the time we made it back to the park after getting our car from the hotel, so that gave us three hours to ride the shit out of that park. 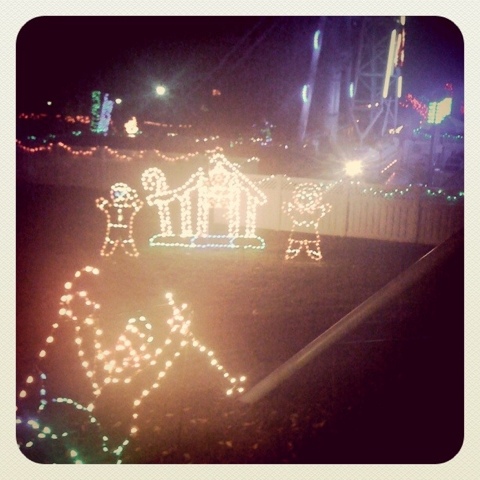 Chooch and I got to take in the “spectacular light show” as we rode the Sky Coaster, which was the longest and most heart-in-throat 10 minutes of my life. “Could you please stop trying to make yourself fall out?!” I kept yelling to Chooch as he clotheslined himself across the bars in order to get a better look at the concrete walkway below us. Jesus Christ, no fear. Meanwhile, I spent the whole ride having anxiety about the inevitable end when we would be forced to slide out of the car while it was still in motion. 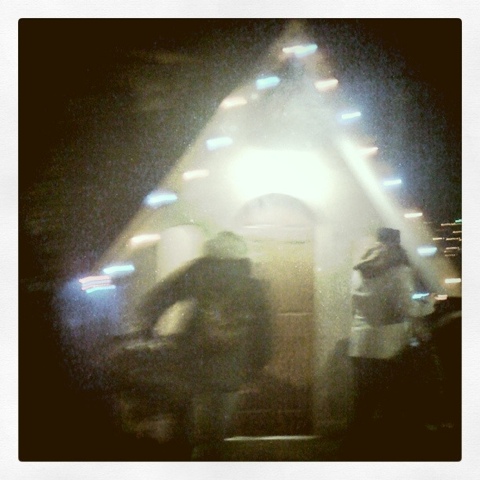 And oh my Lord, they have this little tiny Chapel in the middle of the park. Just sitting there, hoping to hear your prayers. Of course Chooch and I had to barrel through it and act completely ignorant to everything it stood for, while Henry waited uncomfortably outside. 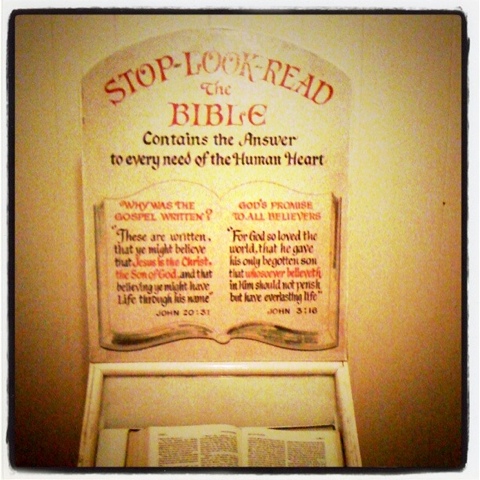 Seriously, what a fucking creepy park! Made me love it twice as hard.

There was this little building that held a diorama of Dutch women quilting at a table. There was a button you could push and the women would come to life, creepy mechanical voices warbling out of a speaker, giving a lesson in Dutch people, I don’t fucking know. The only part that stuck with me was when the one old bag was saying something about how someone was late because “the horse was lame,” and then I couldn’t stop saying that all weekend, in the same weird accent she used. I’m pretty sure it was a man doing the voices.

Unlike Kennywood, Chooch was game for anything and even seemed let down that the little wooden roller coaster wasn’t one of the rides open for winter operation.  All three of us rode the Twister together, and I thought for sure Chooch was going to hate it but he was cheering behind me while Henry was trying to keep his glasses from flinging off. Then Henry went off to find the bathroom, which probably had Scripture graffiti’d in the stalls, while Chooch and I rode some baby airplane ride and I embarrassed him by squealing “Wheeee!” while throwing my arms up. He kept shrugging away from me and saying, “OK! Stop doing that now! It’s not funny.” 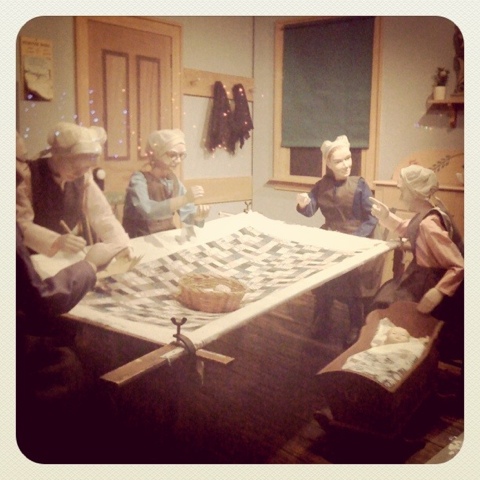 I walked away from that in wide-eyed horror.

But it got worse. While Chooch was riding some mini-whip thing, there was a small gingerbread house nearby. I ducked inside to check it out and honestly haven’t been the same since. It was another mechanical scene. This one involved deranged serial killers in bakers hats, mixing up intestines for “gingerbread cookies,” I don’t even fucking know. But it sped up my heart rate something fierce. 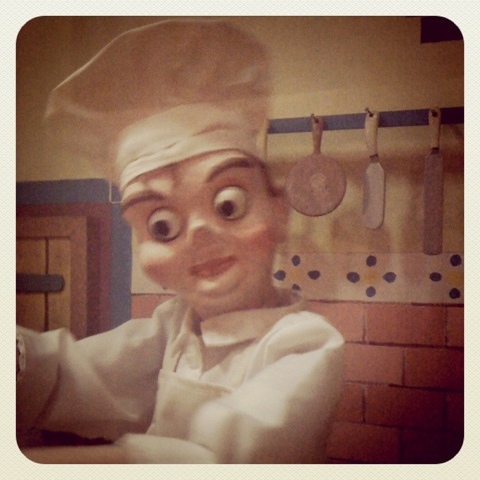 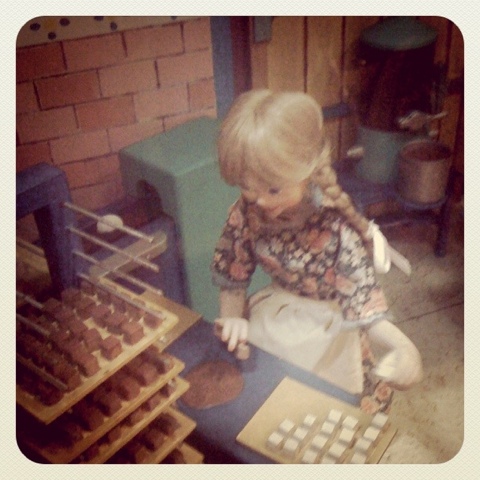 She looks like that fucking broad from Dark Crystal, which is weird because Dark Crystal came up twice that weekend. 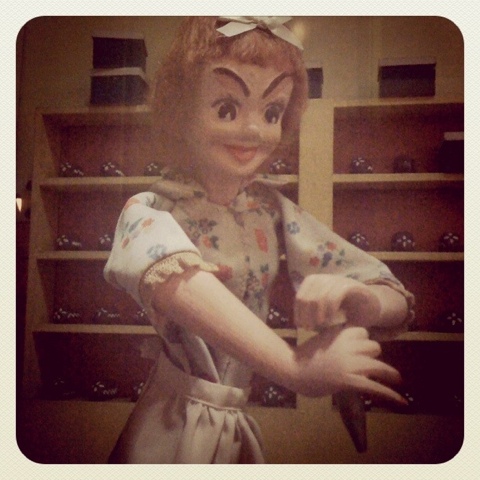 After my experience in the gingerbread house, I walked robotically back to Henry.

“What? What’s wrong?” he asked, and all I could do was stand there and stare at him, my face frozen into a grimace.

Dutch Wonderland is fucked up.

The three of us went on some space shuttle ride that played a video from 1978 and I’m not quite sure what was going on exactly but I think we were being shot at in outerspace? Chooch didn’t like it because I kept falling into him every time the ship rocked to the side in a rusty-geared fashion. It was pretty lame, but I imagine Henry thought it was to the limit.

But my favorite ride was the Wonder House! Oh my God the Wonder House! I want one for my front yard! Everyone sits in the middle of this little tiny house, on a large suspended wooden bench, and the operator then says, “If you start to feel sick, just close your eyes OKHAVEFUN” and then LEAVES while the house revolves around, giving the appearance that you’re upside down. Chooch unfortunately did not grasp this concept and kept yelling, “I DON’T UNDERSTAND WHY THERE IS A ROCKING CHAIR ON THE CEILING. I WANT TO SWITCH SIDES” after the ride operator specifically said not to stand up under any circumstances lest you knock your head off the ceiling or floor.  Then there was a little cupboard in the corner for decor purposes and he was desperate to open it WHILE THE HOUSE WAS SPINNING.  This is what happens when rides don’t belt four-year-olds the fuck in. 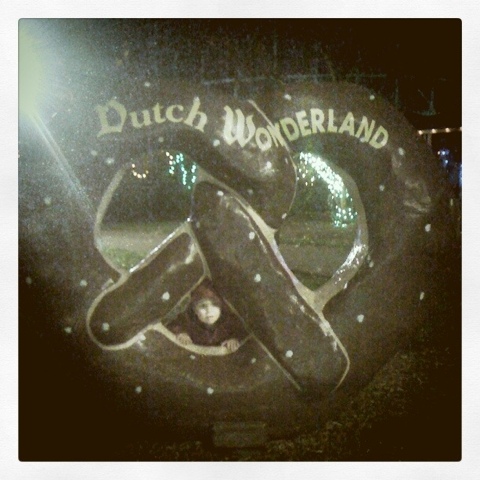 It was three hours of perfect family bliss, as nauseating as that sounds. But it’s true! Earlier in the day, Chooch and I were not getting along at all. It’s hard to keep him stimulated when there’s nothing to do but look at jars of jam and quilts. So he was acting up a lot and I was losing my patience and there were several moments that threatened to morph into Really Bad Scenes. It was exhausting and aggravating. But Dutch Wonderland kind of brought us back together because we were having so much fun and it was non-stop action. He and I joked around a lot, like when we were in line for the Turnpike and some old man was bending over in front of us and I pushed Chooch’s face into his ass. Good times between mother and son. 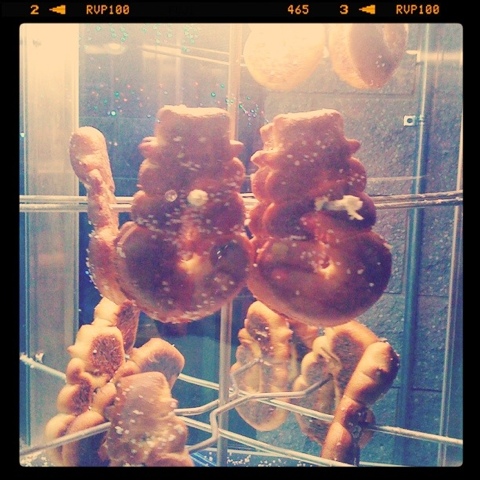 Even the pretzels were winter-themed! And there was a s’mores-making station too! AND A SOUP HOUSE. SOUP!

We saw some kid jump up and attempt to punch the Frosty mascot in the nose. It was pretty intense. I couldn’t stop laughing, but everyone else who saw it was appalled and Frosty backed away with his hands protectively guarding his carrot-nose.

Everyone there was so happy. Maybe I’m just used to the jaded teenagers schlepping around in Kennywood polos, but these kids working at Dutch Wonderland? I bet they go home and tell their parents over a snack of apple sauce how grateful they are to be spearing cigarette butts off the grounds of Dutch Wonderland. Even on the train ride, as we chugged through the park, all the employees stopped watching their respective rides to turn and give us cheerful waves. Custodians waved latexed hands at us. Even the guy ejaculating behind the Wonder House gave us a good shake of his dick.

In other words, it would be no place for me to work.

The lines were short, the other park-goers weren’t too obnoxious, I didn’t even run into any Kate Gosselin-wannabes. Plus all the boys running the rides appeared to be legit Dutchmen and they all stared at my boobs. God, Dutch Wonderland made me feel fantastic.

And Henry held my hand a lot. When does that ever happen? In Dutch Wonderland, apparently.

It was the highlight of our weekend. My face hurt from smiling so much.