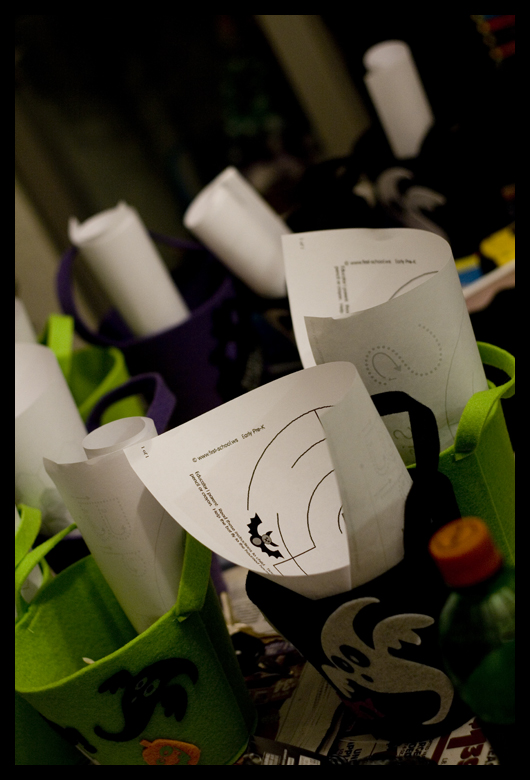 I had given Henry explicit instructions on what to get for the cupcakes while I was at work Thursday night. The plan was that he was going to bake them and then I would attempt to not look like an honorary member of The Dream Team while recreating what I saw in the last issue of Better Homes & Gardens (which somehow is delivered with my name on it, but Henry is always quick to whisk it from the mail slot before I throw it away).

When I came home from work, it was after 9pm and I quickly saw that Henry had not yet made the cupcakes.

I distracted myself by stuffing the treat bags with lame little Halloween party favors and candy. Then I panicked because I wasn’t sure if the game we had in mind was good enough, so I printed out Halloween mazes and stuffed those in the treat bags too. Goddamn children.

This took about fifteen minutes, start to finish. One could imagine how exhausted I was, having single-handedly carried this entire party on my back while Henry pranced around in his underwear.

Somewhere around 10:30pm, I found out that Henry had purchased red decorating gel instead of black. RED! I cornered him in the kitchen as he mixed the cupcake batter and laid into him for being so worthless, so stupid, so irresponsible, so UNRELIABLE.

We broke up for the second time that night, but he still put his big boy pants on and went back to the store in search of black decorating gel.

By the time he came back, I noticed that he also forgot the pretzel sticks/Frankenstein neck bolts.

“I just came back! I am not going to the store again!” Henry shouted.

I raised a knife.

We broke up again.

I know, I know: Erin, why didn’t you just go to the store yourself? And let that motherfucker win?! Never. Let me remind you that the fact I haven’t eaten meat since 1996 was born from my impenetrable stubbornness. My head, it is that of a bull. (And not just because I’m that ugly.)

“Just forget it!” I screamed. “Fuck the cupcakes! I just won’t take them!”

“Fine,” Henry mumbled, pushing past me and going to sit down on the couch.

“NO I’M JUST KIDDING WE NEED THE CUPCAKES OMG GET BACK IN THERE!” I yelled, heart rate up, left arm tingling. Ew I fucking hate parties. As Henry walked by to go back in the kitchen, I muttered, “But the cupcakes are going to look pathetic since you forgot the pretzels, good job.” I saw him tense up for a second, like he maybe was contemplating pushing me into the hot stove, but then he adjusted his Susie Homemaker ruffled apron and went back to ladling batter into the cupcake tray thing.

“Did you start cooking the spaghetti yet?” I asked. We needed a lot of spaghetti noodles for the stupid game that the other moms so thoughtfully left for me to come up with.

“Can I get through the cupcakes first?” he snipped, and we broke up again.

Around 11:30, the cupcakes were cooled off and it was time to start icing them. Henry mixed up a bowl of purple frosting while I struggled with the orange. I didn’t mix it well enough, so all the cupcakes I frosted had dark orange striations throughout them, and that’s on top of the sides I smashed in from gripping too hard.

“Look,” Henry instructed. “Turn the cupcake with your other hand so the frosting goes on easier.” But as usual, I ignored his tip and continued glooping on mounds of frosting before moving on to the frustrating task of smoothing that shit out.

I started to cry. Then I screamed, slammed down the cupcake I was working on, and marched out of the kitchen.

But not before breaking up again, followed by a death threat.

“You’re a fucking retard,” I heard Henry say as he examined the three cupcakes I managed to frost before having a full-blown temper seizure. I really believe that it takes a special kind of person to be able to work with sprinkles and frosting without winding with brain matter Pollacked across the kitchen wall.

I started to watch the Jersey Shore reunion show, mouth still molded into a scowl, until I realized that I couldn’t let Henry take all the credit for the cupcakes. And he would, too. I knew it. So I went back in the kitchen and pushed Henry out of the way. He had a plateful of large marshmallows which he had previously rolled through green glittery sprinkles. I picked one up and decided to start working on the Frankenstein heads, that maybe if I concentrated real hard on that, I could block out the fact that Henry was two feet away from me, making me hate life.

By then, it was midnight.

I did that high-pitched shriek that happens when something isn’t going my way.

“THIS BLACK GEL IS TOO THICK! THIS FRANKENSTEIN IS RUINED!” I hurled it into the garbage.

“Great,” Henry said sardonically. “Now we’re going to be short one marshmallow.” Turns out there was just enough green sprinkles for fourteen marshmallows, the exact number of kids in Chooch’s class. “If you weren’t being such a BITCH, I probably could have fixed that one,” Henry sneered and I wanted to skin him alive.

“Oh you think you’re so fucking perfect!” I spat. And we broke up so badly that I created a profile on Match.com.

Whoever lives in this house after us is going to be haunted by all the ire left clinging to the walls from our mutual belligerence. And that’s assuming we both make it out alive. Otherwise, someone might want to consider taking a wrecking ball to 3021 My Street.

Being short a marshmallow, I made the executive decision to only use half and do spiderwebs on the other cupcakes. Oh great idea, Erin Rachelle. Next time, maybe try to remember that you have an unsteady hand and SUCK at decorating.

How do you bitches make this look so easy?

I was standing over the oven, dragging a toothpick over these bastards, and GRUNTING. It was excruciating! You need precision for this shit. And precision and me? We’re not friends. We’re not even frenemies. In fact, if precision turned into a zombie, I’d push everyone out of the way so I could be the one to shoot it in the motherfucking head. Precision makes me cry, you guys. And I think I have arthritis now. I fucking hate you, too, spider webs.

I do like licking the batter off that mixing contraption though.

The worst part is that I kept catching Henry trying not to laugh when my sanity was very clearly slipping through my fingers like sand through an hourglass, so are the days of our lives.

Of course, they looked nothing like Frankenstein and I had a failure-induced panic attack. Then I realized that maybe it wasn’t the best idea to have a variety.

“What if the kids start fighting because they all want one with a marshmallow head?” I freaked out.

“It’ll be a good lesson for them. You don’t always get what you want in life,” Henry said matter-of-factly. That’s great, but I didn’t want to be there when parts of Mr. Potato Head began flying as the kids fought each other with tinker toys and glue sticks and teachers staggered away with pencils jutting out from their femoral artery. You might be wondering what sort of impression I have in my mind of preschool classes. Obviously a very Mad Max, post-apocalyptic one.

It was nearly 1:00am by the time we finished decorating the fuckcakes. Henry and I slept in separate rooms.

[Ed.Note: Henry can attest this is not an accurate account. It has been toned down. A lot.]

13 Responses to “Prelude to the Preschool Halloween Party”