It’s Friday. I haven’t done a “5” in a while. Here’s an amusement park palate-cleanser:

WHY DIDN’T I DO THAT.

Oh well, Father’s Day and his birthday are both coming up…

Pink and green is my ult color combo, ever since I was a youngin’ and had a green dress with pink hippos on it. I love that dress so much and also it was when I was still cute & and an only child, so I relate these colors to the best days of my life.

I have a faux-suede moto jacket that I thought would look adorable with this shirt so I stupidly asked Henry to take pictures of me in it when we went to the cem for a walk later that day last weekend.

Bro, we’re still in the same city, stand back some more.

Honestly, what goes through this man’s head when I ask him to take a fucking picture? “Take a picture of me but also make sure I’m just a blip on the screen.”

I had to actually take a test photo for him because he did the same fucking shit here too!!! AND IT WASN’T EVEN LEVEL.

Where is Chooch when I need him. Oh yeah, WORKING.

I dunno what these poses are. I don’t even care anymore.

And then instead of helping me down from the wall, Henry took pictures of my flailing descent. (I am terrified of even the smallest heights and have found myself paralyzed in fear before having to dismount from things even shorter than that wall. One time I got stuck in a tree – only like 2 feet off the ground – and Henry took a picture of me crying in it.)

After we left the cem, I was craving chocolate chip cookies. However, it was now around 3pm and god forbid bakeries be open past like, 1pm. So we were stressing about where to go and I remembered that one time, Henry stopped at this ice cream shop on the North Side and we were pleasantly surprised to find that they had outrageously good cookies. So we rolled up and it was CLOSED FOR VACATION. But! I remembered that literally right across there was another bakery-type place that I thought might be open because they also serve food. CLOSED FOR TECHNICAL ISSUES. Henry was like, “Oh, Adda coffee is on this street too – they usually have baked goods.” CLOSED SEVERAL MINUTES AGO.

Literally every other option nearby was closed according to Google and Yelp, but then I saw a listing for this Mexican bakery called Panaderia in Mt. Lebanon, which is on the way to picking up Chooch from work, so we stopped there because they have NORMAL PEOPLE HOURS.

It was very small and narrow so I didn’t take any other pictures, but everything we got (and we got a lot because we’re pigs for baked goods) was wonderful and not too sweet so I ate so much without getting sick!

Now I’m jealous of all the authentic treats Chooch will be smashing in Meridian this summer.

In case you were wondering, I did get a chocolate chip cookie the next day when we went to pick up our pints at Sugar Spell Scoops. It was literally exactly what I wanted. A choco-fucking-chip cookie. How hard is it?! I would have been happy with a pack of Chips Ahoy, honestly.

(I dunno what it is about Chips Ahoy, probably the nostalgia talking, but sometimes those are all I ever want. Even over Oreos. Gimme a fistful of the Ahoys with a cold cup of milk, boy-o.)

Well guys, it was inevitable. About a month or two ago, Girl Buddy was stealing stuff from our yard to use in her nest, which apparently was INSIDE HNC’S PORCH ROOF. I know this because I watched her run next door with all her nesting supplies in her mouth and begin to run up HNC’s sidewalk, only for his wife to come barging out of the house and literally yell, “SHOO! SHOO SQUIRREL!!” Girl Buddy tried to come back again a few minutes but this time was shooed all the way down the driveway to the backyard.

What a hater HNC’s wife is.

Nevertheless, Girl Buddy prevailed and made her nest up in there, and then two weeks ago, the little babies started poking their heads out of the roof opening! And as of last week, they were old enough to leave the nest and were tentatively climbing down the wall. This was super cute but also awful because Ruth was home and they were making a racket. So I was standing on my porch, tossing grapes down the driveway in a desperate attempt to lure them away from her damn porch, because she has been going BALLISTIC lately. Not just with the squirrels (although she did come home one day and bellow MOTHERFUCKING SQUIRRELS!!!), but with everyone. She started a fight with one guy because he parked his van on the street and was pulled forward too far so that she couldn’t easily back out of the driveway and she threatened him with a baseball bat.

I have a recording of it. It was…wow. Just wow. To be that miserable.

So my days have been spent policing the squirrel sitch because I’m so afraid she’s going to come home with a BB gun one day and I am trying so hard to protect these precious beings.

The other evening, Ruth was other there having a conniption. They’re messing with her plants, I don’t even know. She needs to get over herself because her porch is not that nice. Anyway, she was on the phone screaming to HNC about it and he was like “i will take care of it” (she had him on speaker so the whole neighborhood could hear). So she’s out there yelling about it and sweeping (OMG our porches are little square slabs and she is out there sweeping with a compulsion, like numerous times a day, I truly don’t know what is left for her to sweep) and while this was happening, Girl Buddy started hopping over to the porch steps, like “SAY IT TO MY FACE!” I was fucking dying. Girl Buddy is ruthless.

If you read all of my book wrap-up posts, well, you’re a real one. But also, then you might know that I have read and ADORED Alice Oseman’s Heartstopper graphic novel series (the way the backs of my eyes are stinging with looming tears right now). Well, I had been anxiously awaiting the premier of the Netflix adaptation and it was worth the wait. This series is everything. The casting is IMPECCABLE. I watch every episode while hugging myself so that my heart doesn’t explode.

I can’t explain how or why but the confusing emotions and coming-of-age strife and giddy love conveyed in the graphic novels are so palpable. It made me feel like I was back in 9th grade. And the cast totally takes everything Alice Oseman has given them and just fucking sparkles on screen. I love it so much and I’m hoping that we get a season for each book?! I don’t care if you think this out of your demographic. It’s amazing and sweet and pure, and you will love it. Imagine how many kids this is helping right now, how many adults wish they had this when they were growing up. That’s the part that really makes the ice crack a little around my heart. Whew.

Alsox2: This is GOOD:

Netflix’s ‘Heartstopper’ Is Its Highest Scoring Critic And Audience Hit In Ages (forbes.com) 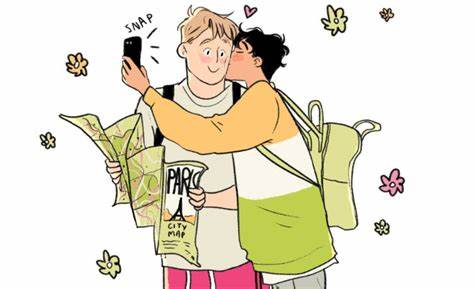 We finally bit the bullet and joined a coaster club/organization. I can’t remember if I mentioned this on here already but I feel like I did? Or did I have some self-deprecating tweet about it? Who knows. But originally, we just signed Chooch up because he is allowed to bring two guests to most of the events. But then saw  that this club is organizing a Nordic trip for the summer of 2023 and excuse me, sir, but I want in on that action. It’s for member’s only so now Henry and I are members too, lol.

Honestly though, I really am hoping that this works out because we don’t have any friends who are into this shit and I am dying to talk to someone about the rumors that Hershey’s Wildcat is going to get RMCd. You know. Roller coaster thangs. We tried this club action before with the Dark Ride and Funhouse Enthusiasts and it was cool to get to do some behind-the-scenes stuff but literally no one in that group talked to us and we felt so out of place.

We’re already off to a bad start with this coaster one because the guy hasn’t emailed us any info like he was supposed to and we need a fucking membership # in order to register for any upcoming event we want to attend, so this is annoying.

Well, I have shit to do so let’s end this on a dreamy note….an NCT DREAMy note, that is!