It wasn’t until we were on the way to the roller rink that I noticed the four long whiskers protruding from Henry’s chin like the acicular spines of a cactus. I felt it was my duty as his girlfriend to not only point this out to him, but to belittle and ridicule him as well. (I was already a bit bristled that he shaved in the first place. I hate the fresh-faced molester look he achieves from shaving his untamed brush.)

“If I ever did something like that to you,” Henry fired back. He didn’t need to finish that statement. We both know what I’d do.

I think on a normal night, he’d have shrugged it off. But on this night, some of my friends from work were coming out to Soul Skate, so he made a panic-stop at a 7-11 and bought a pair of clippers.

I was nervous when we arrived at the rink, because there weren’t many people there. Not that there ever really is, but I was worried that my friends would get there and feel that I had over-hyped Adult Skate with the Steel City Rollers. (Which I do over-hype it, but that’s just my nature to develop unhealthy obsessions and then blow it out of proportion like a bad boob job.) I was also still under the umbrella of that plague that pretty much rendered me useless for two weeks in March. By the night of Soul Skate, though, the pressure had moved out of my sinuses and into my tooth. It was fantastic and didn’t make me feel dizzy or on the precipice of tears at all. [See: sarcasm.]

Not being 100% really showed in my skating abilities. My legs were wobbly and a few times felt as though they might give out.

Kristen got here first and brought two of her friends with her. She introduced me to them by saying, “This is Erin, she’s the one who organized this whole thing!” as we stood right next to some of the Steel City Rollers. I very quickly clarified that I was the one who sent out the Facebook invite in order to recruit new soul skaters. That’s all I need is for the Rollers to think some prissy honky cracker is trying to usurp their territory! I panicked about it for a few minutes, and Henry was like, “I don’t think they would care.” But I know if someone tried to take credit for something I organized, I would rip off their head with my bare heads and then take it outside and curb-stomp it. This is also what I would do to anyone Henry might be stupid enough to cheat on me with.

By the time Sandy arrived, I had skated a few laps already and my sickness had left my face feeling like a glazed ham. I tried to play it off like it was the sweat from An Athlete and attempted to talk to her off-rink for a few minutes, but Roller DJ kept playing all my jams so I’d have no choice but to skate off into the horizon.

“You invite your friends here and then don’t even talk to them?!” Henry chastised as we pretended to be a skating couple in love.

“They didn’t come here to talk to me!” I yelled over the bumpin’ soul. “They came here to see this,” I said, pointing to my quads and almost falling. “And also to see Roller DJ.” It’s always good to end a statement with honesty. This is what I’m teaching in my first off-college course which is being held in my attic next month. The class is called How to Write on the Internet While Avoiding Death Threats. 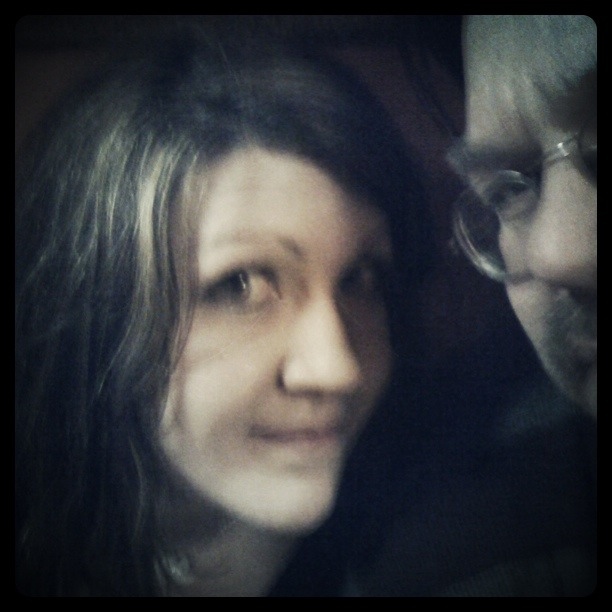 Pretending to be in Love. Henry ruined this picture. But then he bought me an official Steel City Rollers’ Spring Bling t-shirt so I forgave him for that and his horrible shave-job. 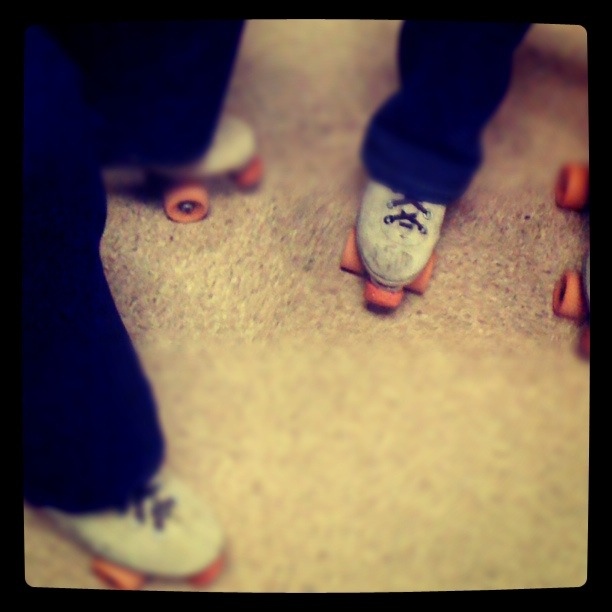 I noticed that Kristen, Sandy, and Kristen’s friends had vanished, but I found them hanging out in the snack room.

“Oh, you’re going to talk to us now!” Sandy sneered, at which point I had to explain the hold that the roller rink has over my motor skills. I can’t just break away to go chat it up whenever I want! I have to wait until the song is over, at which point I will then wait to see what Roller DJ has queued up and only then can it be determined if I can leave that beautiful wood floor. (I also darted off the rink a few times in order to suck Orajel straight from the tube.) 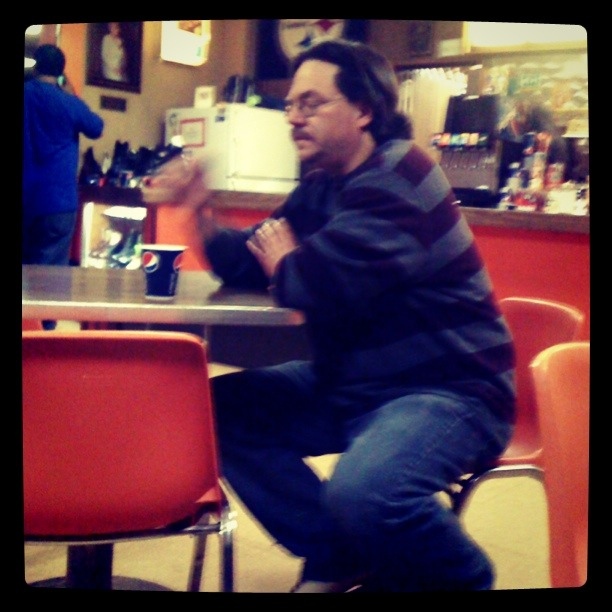 Henry and his molester-mask sat by themselves. He’s intimidated of Sandy, I think, because she harangues him from afar. He attempted to “get revenge” by pointing and laughing at her as she stumble-skated around the rink, when meanwhile she wasn’t even doing a bad job. Whatever makes you feel better, Henry. Why don’t you go treat yourself to a white unmarked van.

Wendy was the last to arrive. “Was I supposed to pay?” she asked. She apparently just walked right in and got away with it because she’s Wendy and can pull shit like that off. If I had tried a stunt like that, I’d probably still be detained with a potato sack over my swollen face in some abandoned factory on Neville Island.

All three of them were skating n00bs, so I probably did look like a dream-on-wheels to them. I had planned on making fun of their Frankenstein skating-strides, but I want them to come back so maybe I shouldn’t do that. They seemed to get joy from watching the Rollers, though, so some of my event organizing insecurities subsided. 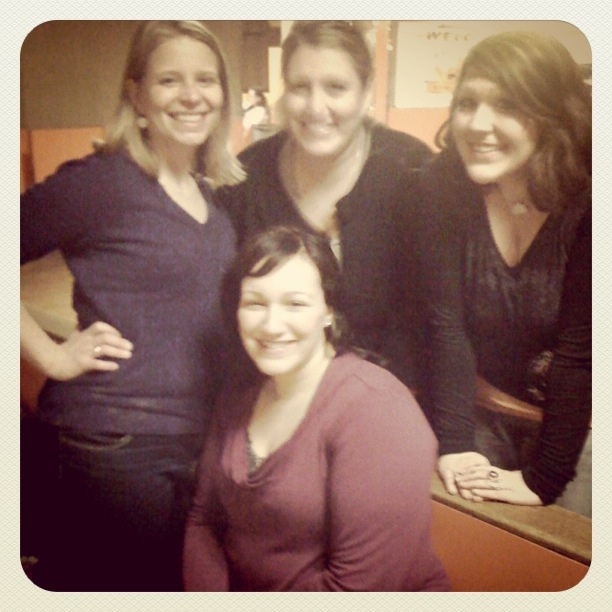 Sandy, Wendy, me and post-spill Kristen

Roller DJ sought me out and came over for a chat. Kristen thought it would be adorable to take my picture with him, which he happily (and me? grudgingly) obliged. It took Kristen an entire late shift to get her phone ready for picture time, which gave me infinite minutes to stand around awkwardly while Sandy laughed at me from behind Roller DJ’s back.

Damn, I love me some Roller DJ, even though he never played my Bone Thugs n Harmony joint that one night. I’m going to ask one of the Rollers to request a song for me next time (OMG this Saturday!). I want Casserine’s magnum opus “Why Not Take All of Me.” In fact, I’m going to illegally download that shit right now. I need to feel all 1996 again.

Because I haven’t been feeling enough like a sixteen-year-old this week. 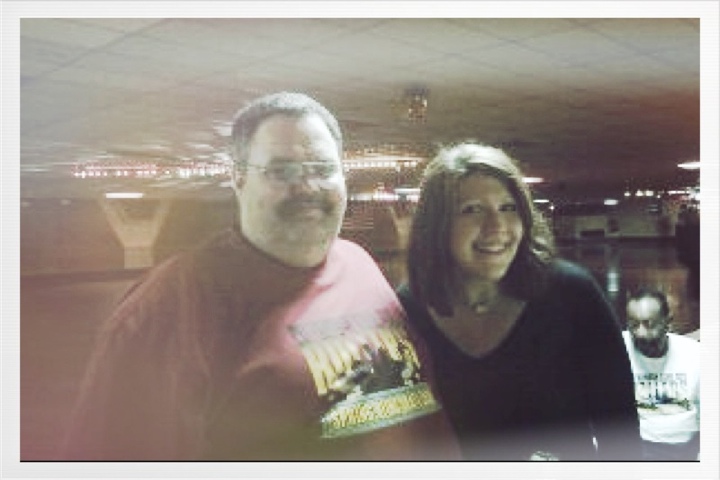 There was only one person I hated that night. Some older broad wearing a mauve sweater straight from grandma’s closet, feet stuffed in her own pair of white leather skates. She had the nerve to scream OUTSIDE! to me at one point when I was nowhere even close to being in her way as she skated grumpily in between me and the wall. I got all fired up about this, because when the Rollers do this, they cheer happily to alert you of their approaching presence. I wanted to scream it back to her later in the night, but of course I was going to add “YOU DUMB BITCH!” to it. Henry quickly snuffed out this plan.

I saw her skating with some super old bitch later in the night, presumably her mom. They had their arms around each other like they were skating through Central Park in 1926.

“Do you think that’s her mom?” Kristen asked.

Sandy and Kristen left around 9:30. Wendy, Henry and I spent the last half hour in the snack room, drinking Orange Crush and essentially talking shit on Sandy and Kristen. We even made hand puppets in their likeness to make the back-stabbing into a real show.

I felt so fraudulent sitting out the last 30 minutes, but the muscles in my legs were the consistency of after-birth at that point, considering it was the most exertion they’d experienced in the two weeks I had been ill. By the time the night was over, I felt even worse, but Soul Skate was worth it.

Hopefully my work friends understand that the only reason I don’t twirl and do splits is because I like to keep it real. Also, because I only know how to skate really fast, like I’m being chased by naked androgynous beings bearing flaming strap-ons.