Today’s blog post is about two past phases I went through. Enjoy.

I sometimes do walking/dance workouts on this one YouTube channel called Up to the Beat Fitness and one of her videos is disco-themed, which is pretty fun/hokey/hilarious to do. I was doing it as a filler workout over the weekend, while Henry was grueling away at the serial killer Valentine factory, aka in the next room over at the dining room table. The music of this workout made me super nostalgic.

“Did I ever tell you about the time went through a disco phase?” I called out to Henry, who murmured something that sounded like, “If I say yes, will you leave me alone?”

“It was in the early 90s when I was in middle school,” I began my tale while performing a sidestep/John Travolta finger point combo.

I remember VIVIDLY being at the K-mart (ew) checkout with my mom and eyeballing a rack of best of the decades CDs. They always had Billboard Top whatever from some random year, and I had a bunch of those already in my strange CD collection. But on this day, I noticed new ones: Disco’s Greatest Hits, Disco Inferno, Disco Delight. Coke-snorting mood music, basically. They seemed interesting to me, so I threw some in the cart. My mom was like, “that’s cool” because she never said no to me.

So, turns out, I REALLY LIKED DISCO. Like, it fucking SPOKE TO ME. The only thing was, it wasn’t “back in vogue” yet, or whatever, to like it. So everyone at school was like, “The fuck is a disco?” But I wanted to talk about it ALL THE TIME like I was on a one-way trip to motherfucking Funky Town. I think it was in 8th grade Language Arts where the class had to get into groups and write a skit for some reason, I already used up a chunk of 1992 brainspace on the aforementioned Kmart memory, so excuse me for being a bit vague here. Anyway, my group, I literally can’t remember a single person who was in it, but we did some sort of Brady Bunch spoof.

Henry mumbled, “Of course you were.”

I begged my group to let me add something disco-related into our skit and they were like NO NO NO YOU FUCKING STRANGE BIRD because I guess I was pretty strange back then (certainly not anymore) but for as strange as I was, I was also extremely convincing so in the end, the group relented and after the final scene, I got to “hustle” on in from the sidelines, stop in the middle and exclaim, “Disco delite!” and then dance away.

Everyone was like, “OMG wow” and it was never spoken of again.

Bonus disco memory: My mom suggested that I pop a squat and watch Saturday Night Fever since I was suddenly Groovy Erin, and while I LOVED it, the only thing that sticks out in my mind when I think about it was that it was the very first time I ever heard the word “cunt” (surprisingly not a common swearword in my middle school in the early 90s for some reason unless I was just hanging out with squares!?!?) and so I got to ask my mom, “Hey, what does cunt mean” and she was like, “DO NOT EVER SAY THAT WORD IN SCHOOL.”

Side note: I made Henry do one of the Up to the Beat Fitness walks at another point over the weekend and Gloria Gaynor’s “I Will Survive” was one of the songs in  the totally random mix, and I had to stop walking and do the pee-squat because I started laughing uncontrollably when I imagined Henry walking slowly through a grocery store, vacant eyes, savoring the borrowed time he had away from Chooch and me, while “I Will Survive” played overhead. He just glared at me when I told him this through laugh-wheezes.

In 2006, I became obsessed with this movie called The Puffy Chair. 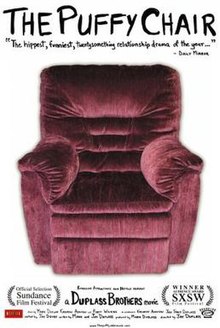 HOLY FUCKING SHIT, at the time I remember feeling like the earth was moving around me and thinking, “THIS FILM HAS CHANGED MY LIFE.” So then I made Henry watch it and he was like, “….
and then I made ex-bff Christina watch it too and she was like, “….” but to be fair, she was a fucking moron and Henry has literally no taste when it comes to cinema. From this movie, I became OBSESSED with Mark Duplass and then learned that MUMBLECORE was a legit genre of film. I was all-in, man. I needed to see everything. Now, this was before the years of streaming, back when you still had to order real life DVDs from Netflix, and actual video stores still existed.

In the back of the original location for the local cafe, Crazy Mocha, there was a small video store called Dreaming Ant. Between that place and the SORELY MISSED Incredibly Strange Video which I could walk to from my house, I was spoiled with the selections of student art films, Asian horror, international dramas…..and MUMBLECORE. If it existed, they had it and I went on a renting flurry.

a subgenre of independent film[1][2] characterized by naturalistic acting and dialogue (sometimes improvised), low-budget film production, an emphasis on dialogue over plot, and a focus on the personal relationships of people in their 20s and 30s.

Henry H-A-T-E-D it. So much talking. So many young people, just talking. Can’t relate. Put to sleep. Boo hoo.

And anytime I would try to explain it to friends and (pre-Law Firm) co-workers, they were like “That sounds dumz0rz.” So I got made fun of a lot.

One of my favorite films in this genre was “Hannah Takes the Stairs” which starred then-unknown Greta Gerwig.

“Greta Gerwig was in that movie and I would gush about her all the time and my friends were like no one cares BUT NOW THAT SHE’S DIRECTED LITTLE WOMEN EVERYONE IS LIKE OMG GRETA GERWIG BLAH BLAH BLAH, LIKE THE SAME PEOPLE WHO USED TO MAKE FUN OF ME!” I wailed at work last week to Glenn, who was like, “Don’t worry, I still don’t care.”

Sorry. I have been a little UP IN ARMS about this.

Now, if you’ll excuse me, I gotta Get Down Tonight.