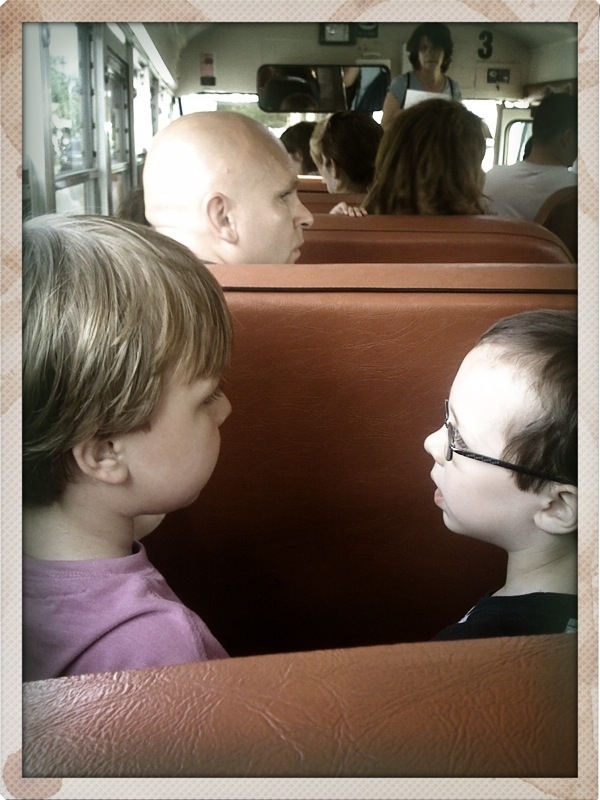 There’s not too much to tell about the zoo trip considering Chooch didn’t let us stay more than 20 seconds at each exhibit before yelling, “OK, GREAT. I SEE IT. I SAW IT. LET’S GO!”

Bitch, I want to look at the fucking lion! I haven’t been able to really enjoy the lion (or any other animal for that matter) at the zoo in years thanks to my unimpressed son. I could literally stand there and watch the Silverback all day. I’m totally going by myself next time.

Totally not caring about the giraffes.

Even though it was a school trip, the class didn’t stick together. I was partially glad about this because I didn’t want to get stuck shuffling through the zoo with the mom brigade, but at the same time I felt bad for Chooch because he rode on the bus with his buddy Zachary and expressed interest in sticking with him through the zoo. However, I felt like Zachary’s mom held him back when we got off the bus, purposely preventing him from getting stuck with us.

Or it could be that she was waiting for her husband and youngest son, who had driven separately, but if that’s the case then no one will feel sorry for me. Wah.

Before we got to the monkey house, I remembered that I had the crappy point-and-shoot in my purse, so I shoved it at Chooch and suggested that he take pictures of the animals. This bought us significantly more time at each exhibit, even though he wasn’t actually taking any pictures because he’s too impatient to hold the button down for the whole ONE POINT FIVE SECONDS it takes to capture an image. So every once in awhile, Henry would grab it and start snapping random pictures just so it would look like he accomplished something. Funny how when it comes to taking clandestine photos of me with my phone, Chooch has all the patience in the world.

I wanted to stay and look at the octopus for much longer than Chooch allowed me. Henry was all, “Just take your time and look at things! I’ve got Chooch.” But what I heard was, “Here give me your phone so you have no concept of time and miss the bus and have to stay here forever getting raped by orangutans, you ruined my life, bitch.”

All the times I’ve been inside the aquarium, I had no idea you could actually pet the sting rays! Of course I wouldn’t know that—Chooch never let me check out their tank because it’s right by the GIFT SHOP. I refused to leave until I touched one.

“Just touch one of the smaller ones that keeps swimming past,” Henry begged, after we had been standing there accomplishing nothing for countless minutes.

“No! I want one of the big ones,” I said defiantly.

“I forgot who the kid is here,” Henry muttered.

I finally got to touch one for .00008 seconds before screaming and pulling back my hand. It was squishy and soft and pleasant on the fingertips, but it was still a STING RAY.

Chooch actually let us hang out with the sharks for awhile. Probably because I told him that they’re our cat Marcy’s relatives.

There was an incident where four older boys ganged up on Chooch in one of the play areas. They were probably around nine or ten, and I thought that they had been playing pleasantly at first, because older kids seem to generally appreciate Chooch’s foul mouth. But a few minutes later, we had moved on to this area with little scooters, and they were already there. Chooch walked over to get on a scooter and one of them said, “Leave us alone!”

“WHICH ONE OF THOSE ASSHOLES SAID IT?” I kept loudly demanding, to which Henry would WHISPER back, “Which one do you think? Take a wild guess.” Then he was pissed off when I proceeded to guess wrong three times because in my opinion, it could have been any of the four. I really thought it was the fat boy swaddled head-to-toe in DC brand, but Henry said it was the preppy fuck with sunglasses on his head.

They were in my crosshairs for the rest of the day after that, and when they walked past me after deeming the scooters “lame” upon Chooch’s arrival (hello, aren’t they too old for that shit anyway?) I said loudly to no one in particular, “I HATE bullies.” I made eye contact with some of them and then quickly swiveled to make sure the mom chaperone had heard me, but she was too busy with her nose to her phone, watching Young and the Restless clips on YouTube.

Meanwhile, Henry used this trip to the zoo to remind us that he knows a lot about birds, which is why I won’t be going to the aviary with him.

4 Responses to “A Quick Zoo Recap”